Assist Immortus in taking over the galaxy

Immortus traps individuals who become lost in Limbo, and due to the nature of that plane, they begin to forget their former lives and change into misshapen beings. Immortus conditions these into servants who can perpetuate his schemes and manipulations of historical events.

The first Space Phantom encountered by the Avengers copied Iron Man, Hulk and Giant-Man (Hank Pym. During the fight, he first copied the Hulk, and battled Iron Man. He took the shape of a flying insect to escape, but Iron Man continued to battle the Hulk. The Space Phantom attacked the Wasp in his insect form, and then became Giant-Man.

After fighting Iron Man he took Iron Man's form. He finally attempted to copy Thor but was sent back to Limbo because he couldn't affect Asgardians. The Space Phantom incident was the main reason why the Hulk quit the team.

All the Space Phantoms appear identical and can also take the form of other life-forms, it can be difficult to determine which Space Phantom did what; the following activities have previously been attributed to the Space Phantom who first encountered the Avengers.

A Space Phantom allied with the Grim Reaper and impersonated Madame Hydra, and commanded a division of Hydra. The Space Phantom battled the Avengers, but was shunted back into Limbo when he attempted to mimic Rick Jones who linked to Captain Mar-Vell at the time.

A Space Phantom was compelled by Immortus to impersonate Mantis to deceive Kang.

Another Space Phantom attempted to trick Thor into freeing the planet Phantus from Limbo. It allied with Thor to save Phantus, which led to Thor losing much of Mjolnir's power.

Rom is confronted by Dire Wraiths in Limbo and is observed by the Space Phantom who then begins to scheme. The Space Phantom searches out another Galadorian trapped in Limbo, Rom’s old friend Karas. He then assumes his appearance which immediately teleports Karas out of Limbo. After helping Rom in battle with the Dire Wraiths using Karas command of The Living Fire, The Space Phantom (disguised as Karas) tells Rom how Karas, the original Firefall, came to be trapped in Limbo. As more Wraiths attack the Phantom tries to use the Living Fire to save himself and it rebels against him. Karas’ ID reappears in Limbo and explains to Rom what had happened. As yet another assault by the banished Dire Wraiths begins, Karas summons the Living Fire to envelop Rom and return him to Earth. As Rom asks why he Karas doesn’t free himself, Karas tells him that upon his return to his homeworld he has discovered that he has no humanity to return to. He then tells Rom to “return to Galador to see for yourself, Rom. For Galador no longer….” And then the dimensional portal shuts.

A Space Phantom was used as a pawn by the Young God Calculus in a scheme pitting Spider-Man against the Avengers. The Space Phantom, masquerading as She-Hulk, attacks Spider-Man and traps him in a hole; Spider-Man then goes to Avengers Mansion to pick a fight; Captain America quickly proves that it could not have been She-Hulk; Jason Jerome is making harassing phone calls asking Mary Jane Watson out. Spider-Man Gathers Puma, Prowler, Rocket Racer, and Sandman to assist him on a case involving the Avengers and a trouble-making masquerading Space Phantom, who is working for a mysterious master.

The Phantoms can assimilate anyone, even to the point of torture and escaping notice of even mind-readers. Their large numbers also help in combat.

Space Phantom appears in the Hulk/Avengers segment of The Marvel Super Heroes. 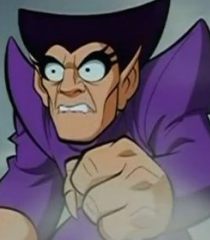 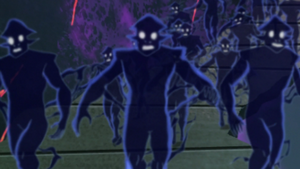