Purge all the inhabitants on Chorus

The Space Pirates are a group of mercenaries employed by Control whose goal is to execute every inhabitant on Chorus, including the Reds and Blues. The group serve as the primary antagonists of the Chorus Trilogy.

According to Felix in Cloak and Dagger, the team orchestrated the war between the Federal Army of Chorus and the New Republic, making sure it continued to the point where the two sides killed each other. Felix then adds that the Reds and Blues were used as a means to cause further conflict between the two sides, all due to their superior wanting the planet free of its inhabitants, but in a way that makes it appear as a "tragedy," rather than a massacre.

Manipulating the People of Chorus

Following the defeat of Project Freelancer, the Blood Gulch Crew are sent on a ship, bound for Blood Gulch. Unfortunately, seemingly due to the actions of the Reds and the Blues, the ship instead crashes on the planet Chorus. Despite the group's antics supposedly causing the ship's crash, it was the actions of Charon Industries' Space Pirates that truly caused it. The planet of Chorus had been abandoned for some time by the UNSC, and seeing an opportunity, Charon Industries moved to take the planet for themselves. The main hindrance to this was the inhabitants, who would pose an issue to this plan. Former UNSC soldiers Felix and Locus were hired and implanted on the two main factions of Chorus, the New Republic and the Federal Army of Chorus respectively, in the hopes that they would help escalate the conflict that had broken out on the colony.

This was accomplished by killing the leaders of both sides, an undetermined amount of leaders in the Federal Army were killed and at least three leaders of the New Republic fell in the line of duty before intervention arrived. Having learned of the Blood Gulch Crew's arrival on the planet, Felix and Locus were tasked with locating and retrieving the team, in order to use their natural clumsiness and destruction to further manipulate the planet. About this time, Felix arrived on scene just as Locus did, with Locus sending troops to test their defenses, while Felix would arrive "just in time" to save them. The plan worked, as Wash and the others witnessed Federal troops attack Blue Team, only for the troops to be killed by the Blues. Felix then intervenes, blocking a would-be-fatal shot, before being wounded by Locus.

After Locus vanished, the Blood Gulch Crew promptly interrogated Felix, who revealed the existence of the New Republic and their plight, and urged the team to help, though they refused, but did prepare a defense for Locus's eventual return. When Locus returned, accompanied by numerous Federal Army soldiers, the ensuing battle was a defeat for the Blood Gulch Crew, with Wash, Sarge, Donut, Lopez and Freckles being incapacitated and captured, and Felix, Tucker, Simmons, Grif and Caboose were forced to retreat without them. The current leader of the New Republic, Vanessa Kimball, convinced the survivors to help her faction against the Federal Army, with the promise of freeing their friends. About this same time, Agent Carolina got in touch with Locus, masqueraded as "Control", Locus's superior, and ordered him to keep the captured members alive.

As weeks went by, Tucker downloads files related to the captured Red and Blue members, during a rebel attack on F.A.C. Outpost 22. The files revealed that the captured Blood Gulch Crew had been sent to various outposts, and Simmons, Grif, Tucker and Caboose promptly formed a rescue team and trained for a period of five days in the hopes they could be given clearance to save their friends. During their downtime, Tucker learned from Kimball a disturbing fact: Felix had once served alongside Locus and the two of them had been hired by the respective armies to support them. Tucker decided that clearance or not, they'd go and rescue their friends, and the four promptly left their lieutenants behind and struck out for F.A.C. Outpost 37, where their friends were kept. During their ride, they discovered the existence of what appeared to be Special Forces Federal troopers. Reaching the base, the team found their friends, not in chains, but free, with both groups confused, each believing they'd been there to save the other.

Battling the Reds and Blues

Weeks earlier, shortly after the battle of Crash Site Bravo, Wash, Sarge, and Donut were treated for their injuries by Emily Grey and contacted by General Donald Doyle, acting leader of the Federal Army, who promised them he'd help get their friends back if they'd help defeat the New Republic. Seeing no other way to do so, they agreed. About this same time, Lopez was brought back online, and Freckles, now put into a memory chip, was given to Washington by Locus. In the present day, as the group wondered about why both sides were fighting each other, the group witnessed the Federal Army be massacred by invisible opponents with the ability to disintegrate bodies. These attackers, led by Locus, promptly appeared and forced the group's surrender. Just as they prepared to execute the crew, Felix arrived and saved them, but reveals his true allegiance.

At this point, the entire group's belief about the war was turned completely upside down. Felix revealed the war had been started by the pirates, he and Locus were part of that group, and the actions of the Blood Gulch Crew had only helped them out even further, with the goal being to purge Chorus of its inhabitants. Locus ordered the group's execution, but was surprised by a turncoat mercenary, Agent Carolina intervened as the entire group was about to be executed, fought off Felix albeit being stabbed, and escaped with the group, along with Emily Grey, who had survived the attack. Felix and Locus were ordered by their superior, Control, to inform Doyle and Kimball about the Reds and Blues "deaths", and use their "sacrifice" to push the factions into a final battle that would result in the extermination of all life on Chorus.

Weeks beforehand, Carolina had found out the true purpose of the war, along with Epsilon, and promptly set out to find the Blood Gulch Crew. Having found them, she and Emily were able to deduce that the pirates utilized technology not consistent with modern standards, and that someone was building advanced weapons for them. Deploying into two groups, the teams searched Crash Sites Alpha and Bravo to find information about this, the Bravo team found a manifest, while Alpha brought back a prisoner. The prisoner, Zachary Miller, was interrogated, revealing the existence of a radio jammer that had blocked their communications to the Federal and New Republic leaders. At this time, they were attacked by the mercenaries, and it was deduced the chip given to Wash was actually a tracker.

Teleporting to a fueling station, Epsilon purged it of the tracking device, and Freckles was effectively freed. The group was then contacted by Felix, who offered them a way off the planet, if they'd agree to never reveal their involvement, they'd be spared. While reluctant, Emily Grey supported them leaving, stating that they had no reason to fight for what wasn't their own. At this same time, the New Republic and Federal Army arrived at the capital city, and prepared for a final showdown. The two sides exchanged barbed words, and promptly attacked each other. At this same time, Locus and Felix discovered that their offer had not been taken, with the Blood Gulch Crew arriving at Radio Jammer Station 1C to disable it. Wash and Locus fought each other while Felix went after the Red and Blue teams, who had killed or incapacitated the other mercenaries.

Felix fought Tucker in a short duel, stabbing him, and he proudly related the actions that caused the war and it's actions, only to find out to his horror that it had all been a front. Tucker had distracted him and goaded him into a speech, while the others disabled the radio jammer, allowing Epsilon to broadcast the speech to the capital, resulting in Kimball and Doyle ordering a truce and the war being promptly halted. Felix and Locus retreated, vowing that their battle isn't over. While the two mercs were scolded by Control, the Blood Gulch Crew learned that Charon Industries had started the war, and the instigator, Control, was in fact, Malcolm Hargrove, Chairman of the Oversight Committee and Charon Industres CEO.

The crew contacted him and his mercenaries, accepted the declaration of war Hargrove had given, and the Blood Gulch Crew began preparations for conflict with Charon Industries. A displeased Hargrove then asked the A.I. F.I.L.S.S. for confirmation on a crate sent by Locus, and was glad to see the contents had been delivered. The contents of the crate had been the helmet of Agent Maine, known more commonly as The Meta.

Some time after this declaration of war, Felix, Locus and several mercenaries invaded and killed all the UNSC crew of the prison ship UNSC Tartarus. After "recruiting" several prisoners "willing" to join their forces, they found two individuals with experience with Freelancers: Aiden Price, the former Counselor of Project Freelancer, and a former Insurrectionist soldier. 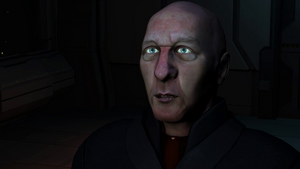 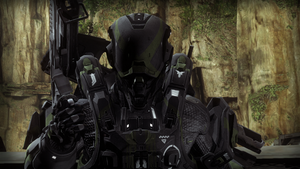 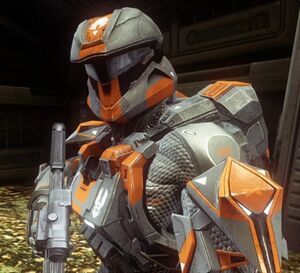 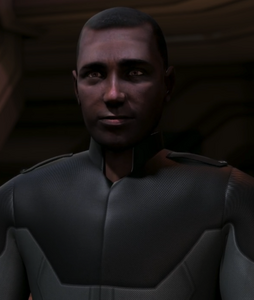 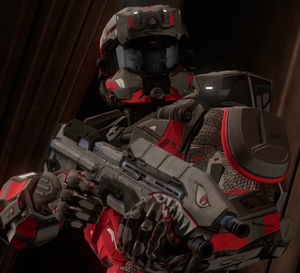 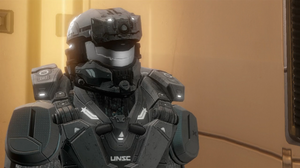 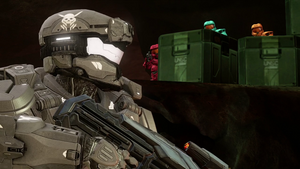 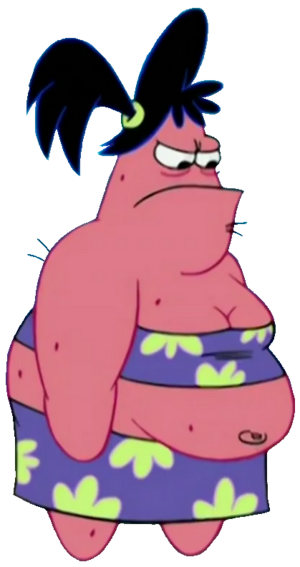 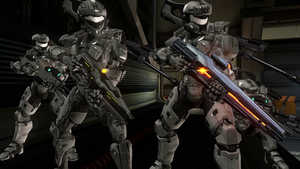 Other Mercenaries (Unknown)
Add a photo to this gallery

Retrieved from "https://villains.fandom.com/wiki/Space_Pirates_(Red_vs._Blue)?oldid=3806056"
Community content is available under CC-BY-SA unless otherwise noted.