Villains Wiki
Register
Don't have an account?
Sign In
Advertisement
in: Article stubs, Infobox Update, Fist of the North Star Villains,
and 14 more

Spade (Fist of the North Star)

Spade is a minor villain in Fist of the North Star. He serves as one of Shin's top lieutenants and is the first of them encountered.

Kenshiro first spots him trying to steal seeds from a farmer named Misumi. As Kenshiro takes out the goons, Spade almost hits him with a bowgun, but the former uses a secret Hokuto Shinken technique, the Nishi Shinku Ha to take Spade's eye forcing him to retreat.

Spade later comes back for revenge and kills the farmer, determined to cook the seeds for himself. Spade then has his mace-wielding goons entrap the Hokuto Shinken user, but he breaks free killing them, first by kicking one of Spade's axes into one, then using the Ganzan Ryozan Ha on the other after pulling him close.

Desperate, Spade charges with two more axes, but gets his nose punched by Kenshiro. He then attempts one final assault, but Kenshiro breaks his arms and uses the Hokuto Zankai Ken, hitting the Toi powerpoint. Kenshiro then gives the villain three seconds to think about his crimes before the technique blows him in two.

In the anime, Spade's role is a bit expanded; he steals the seeds from farmer Smith and his hideout is raided by Bat who is faking allegiance to KING. He distracts them by showing off his buggy then departs, leaving Spade enraged. In addition, Spade was given 7 seconds to look back on his misdeeds.

In Life is Offside, Spade was once a soccer player who wanted to rise in the ranks just before the nuclear apocalypse.

Spade is a stronger thug, using a bow gun to shoot from a distance. He will also deploy axes against his foes. 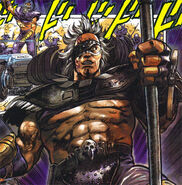