Villains Wiki
Register
Don't have an account?
Sign In
Advertisement
in: Outdated Articles, One Piece Villains, Non-Action,
and 42 more

Working for the World Government.

Get the blueprints to Pluton (failed).

Get his revenge on Franky (failed).
Hand Nico Robin to the Marines (failed).

He was voiced by Masaya Onosaka (who also voiced Alessi in JoJo's Bizarre Adventure: Heritage for the Future, Obsidian in Beast Machines, Jadiete in Sailor Moon, Marshmallow Jamen in Mashin Sentai Kiramager, and Clock Shadow in Ressha Sentai ToQger) in Japanese and Christopher Corey Smith who also voiced Oropo in Wakfu, Splashmon and Dorbickmon in Digimon Xros Wars/Fusion, Wonderweiss Margela in Bleach, Riser Phenex in Highschool DxD, Thales in Fire Emblem: Three Houses, Emperor Mateus, Slayde, and Legion in Final Fantasy, Kunikazu Okumura in Persona 5, Thugs-4-Less Leader in Secret Agent Clank, Molag Bal in The Elder Scrolls, Lord Betrayus in Pac-Man and the Ghostly Adventures, Ishidate in Naruto the Movie: Guardians of the Crescent Moon Kingdom, the Gold Watchers, Malak, and the Clown Gremlins in Dark Deception, John Bacchus in Mirai Nikki, and Kandachi in Naruto: Shippuden) in English.

At most times, Spandam can be very klutzy and tends to spill his hot coffee on himself. He also has the habit to of getting hurt, king him mostly a comedic villain like Buggy. However, Spandam can also be a malicious individual, especially at times when he is gloating over his opponents. Spandam would even hit Robin which is an act that even disgusts Rob Lucci himself.

Spandam is greedy for power as he desires Pluton to destroy all countries with lives to kill not only pirates but innocence people too. Spandam's clumsiness has made a fool of himself as he is nothing more but a careless idiot. He thinks Luffy defeated five marines instead of hearing five hundred. He lied Oimo and Kashi to work for the Government for their freedom. He accidentally pressed the button of the Golden Den Den Mushi to summon the Buster Call. His beliefs of the might of the World Government would only had led him nothing but their own downfall.

Spandam holds a grudge on Franky (formally known as Cutty Flam) for breaking his nose and destroyed the blueprints of Pluton.

Spandam was the leader of both the CP9 (a powerful group of professional assassins run by members of the World Government) and in control of Enies Lobby. (a massive stronghold that held about 10,000 men) Spandam's political power had also given him the privilege to call a buster call and easily obtain two devil fruits through his connections.

Spandam, despite being the leader of CP9, he was the weakest member with him even being weaker than a common Marine. However, Spandam makes up for it by being very manipulative as he managed to trick the people of Water 7 and Jorge into thinking Tom was the one that attacked the judicial ship. Spandam also wields a sword called "Funkfreed" that actually "ate" a Devil Fruit known as the Zo Zo no Mi which is a Zoan based Devil Fruit that allows the sword to transform into either an elephant hybrid or a full elephant.

Years ago, Spandam, along with his CP5 agents at the time, was sent to Water 7 to uncover the blueprints to an ancient weapon known as Pluton that is able to destroy the world. Spandam knew that Tom had the blueprints but the fisherman shipwright claims he doesn't have the blueprints and sends Spandam on his way. However, Spandam is displeased even more so that Tom is going to be let go despite being involved in building the ship Oro Jackson for the Pirate King Gol D. Roger. Spandam then sets up a plan that involves him using his CP5 agents to steal Franky's (going by Cutty Flam at the time) battleships and attacks the judicial ship. Spandam's plan manages to work as he is able to frame Tom and his shipwrights (Iceberg and Franky) for the crime. Tom manages to punch Spandam away but this only urges the Marines to tranquilize Tom. Jorge then orders the Marines to let go of Iceberg and Franky and take Tom on board the Puffing Tom where he will be taken to Enies Lobby to be executed. Soon, Spandam is pistol-whipped by Franky scarring his face for life and Spandam orders the Marines to take him down. Franky manages to get away but soon reappears in the front of the Sea Train Puffing Town. However, Franky ends up getting run over much to Spandam's delight and continue on to Enies Lobby. 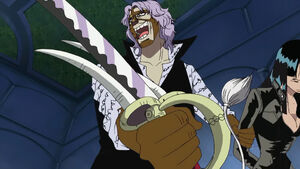 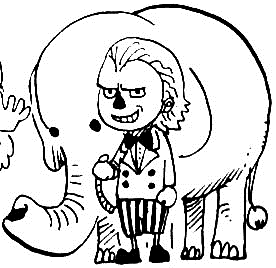 Spandam as a child with his pet elephant.

Spandam's concept art from the anime. 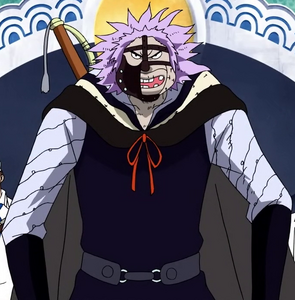 Spandam with a broken face during the Enies Lobby Arc. 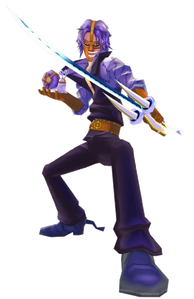 Spandam in One Piece: Unlimited Adventure. 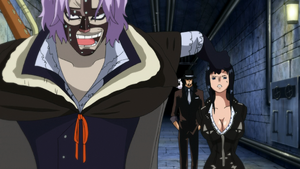 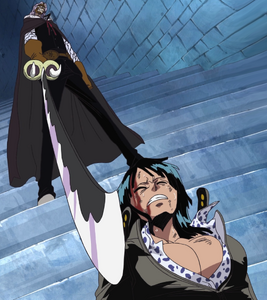 Spandam with the beaten Nico Robin. 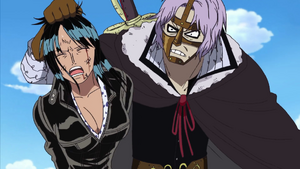 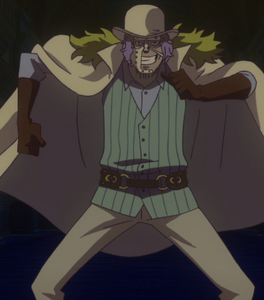 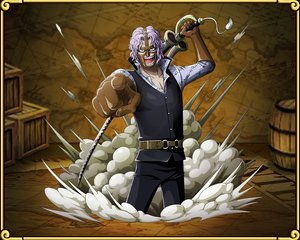 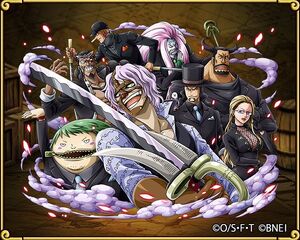 CP9 in the One Piece Treasure Cruise.