Lightning King of the Bullet Fists

Help Sigma with his dangerous schemes.

Spark Mandrill is one of the eight Mavericks of the original Megaman X. Based of a mandrill, he serves as a 'brawns, but not brains' type of character, preferring not to think, but just fight.

He joined Sigma's rebellion out of loyalty and because he thought Sigma was right. In the end, he is defeated by X, but in the remake Mega Man Maverick Hunter X, he can also be fought by Vile.

In battle, Spark Mandrill can release electric sparks around the ground, hang on the ceiling to drop on the player or do a dashing punch. Despite this, he is ridiculously easy to defeat with his weakness, the Shotgun Ice, which freezes him in place. 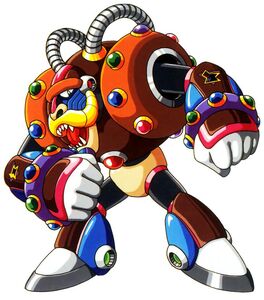