The Spawn of Cathulhu are hideous, demonic monsters that are both creations and minions of Cathulhu and minor antagonists in the episode "The Collect Call of Cathulhu" of The Real Ghostbusters cartoon series.

They are acolyte creatures that serve Cathulhu who spawned them. While they resemble their namesakemaster, the Spawn are far smaller in size. The Cult of Cathulhu, worshippers of the said Old One, forced several to serve them in the name of their god. One was dispatched to the New York City Public Library to steal an English translation of the Necronomicon recently put on display. It surprised a security guard and caused him to faint but the Spawn left with the dark tome.

While tracing the Spawn of Cathulhu to the sewers, the Ghostbusters encountered many at once. The Ghostbusters zap them with Proton Streams, but this yet proves ineffective as they regenerate after the streams damage their bodies. They improvised and boiled the water to create a smoke screen and escape. Peter Venkman lost a boot during the strategic retreat.

After Cathulhu was defeated by the Ghostbusters and the stars were no longer in a favorable alignment, it seems likely the Spawn of Cathulhu also dispersed, and the Cult of Cathulhu upon their defeat, no longer control the said demonic beasts. 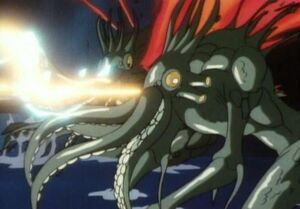 The Spawn of Cathulhu attacking.