Specimen 10 is the tenth guard and a major antagonist from the 2014 indie video game Spooky's Jump Scare Mansion.

In the beginning, Specimen 10 appears to be a large worm with huge black eyes. As the worm starts chasing the player, the worm dies from a humanoid parasite escaping trough the worm's head. It appears to be a humanoid with a deformed upper body without arms and a body which is created out of a yellow organic layer that covered the whole up part of its body, and the main one without hands and humanoid legs. Its torso can open up revealing a gaping mouth with rows of teeth.

When far away, Specimen 10 turns into a large leech-like creature with rows of sharp teeth.

Specimen 10 starts appearing from Room 617 once the player turns on the generator. At the start, the worm appears to attack the player, only for Specimen 10 to erupt from the worm's head, instantly brutally murdering it before chasing after the player.

Once killed by Specimen 10, a quote is shown saying that it is the human's fault.

Along with the quote is a binary code that translates to "You are more than just an animal. Use the soul you've been given. And be responsible for your actions." 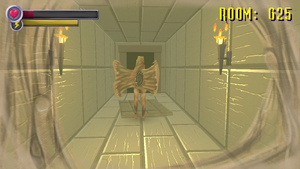 Specimen 10 chasing after the player.
Add a photo to this gallery

Retrieved from "https://villains.fandom.com/wiki/Specimen_10?oldid=4061899"
Community content is available under CC-BY-SA unless otherwise noted.