Specimen 11, also known as the Food Demon, is the eleventh guard and a major antagonist from the 2014 indie video game Spooky's Jump Scare Mansion.

Specimen 11 appears to be floating and moves very fast. It appears in the freezer room of Room 710 when the player takes the keys and tries to escape, Specimen 11 starts chasing the player. While being chased, Specimen 11 can turn the doors invisible trying to confuse the player, sometimes even trying to make visual hallucinations towards the player. Striking Specimen 11 with the axe will make it teleport to a random spot in the current room.

"With every bite with bone and skin.
The temple groaned and shook again.
His dwelling place did I neglect.
To the end with bad effect."

Also included is a flashing binary code. When translated, it reads "Believe in God, but question the teachings of men."

In the 3D Mode, Specimen 11 has its hand raised, trying to catch the player when chasing and a flame around its horns that emits yellow light. Specimen 11 is slightly faster, although it no longer speeds up as it gets closer to the player. While still able to create hallucinations, escaping from it fast enough prevents it from doing it. If the player hits it with the axe, Specimen 11 will teleport back to the entrance of the room.

In the HD Renovation version of the Spooky's Dollhouse DLC, Specimen 11 is one of the three specimens selectable as a sacrifice to close the Hellgate, the others being Specimen 6 and Specimen 8. In the original version, Specimen 4 is selectable instead. Its chase sequence consists of hallways with a similar layout to the fast food restaurant where Specimen 11 was first encountered. Several hanging meat serve as obstacles in some of the rooms. The penultimate room to the Hellgate Source is a shorter version of the play area maze. 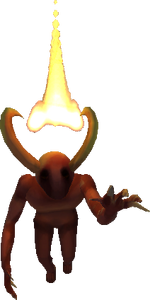 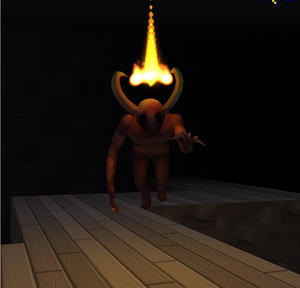 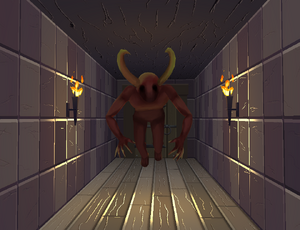 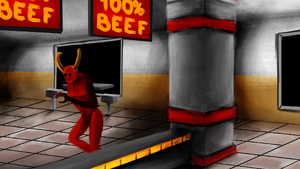 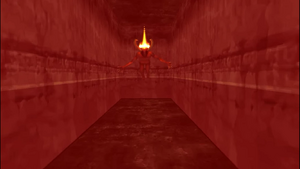 Specimen 11 with its arms out at the end of its maze. 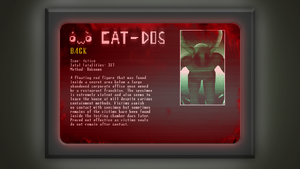