Sitting on the crate.

Specimen 13 is the penultimate guard of Spooky's before Specimen 9's final boss form and a major antagonist from the 2014 indie video game Spooky's Jump Scare Mansion.

Specimen 13 is a beautiful young female with long, shaggy grayish-white hair. Before starting to chase the player, she appears sitting on a crate with her back to the player, only having a white towel around her waist. She reviews her full appearance when she kills the player, showing that she is actually a black-eyed old woman with sharp white teeth.

In the 3D version, Specimen 13's towel is replaced with a fish's tail.

As the player goes farther from her, she will move faster and faster until the player escapes.

In the 3D version, she loses her towel, and replaces it with a long blue fishtail. She appears to be topless, and she has a different animation when she dives into the water and starts the chase. She can kill the player in three hits, but there is a pause between each hit. 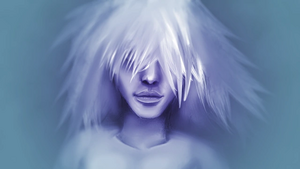 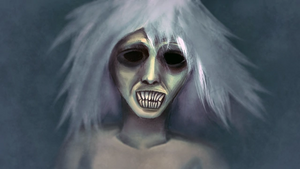 Retrieved from "https://villains.fandom.com/wiki/Specimen_13?oldid=4010509"
Community content is available under CC-BY-SA unless otherwise noted.