Specimen 2, also known as the Slime Monster, is the first hostile creature and a major antagonist of the 2014 indie videogame Spooky's Jump Scare Mansion.

Specimen 2 is a semi-solid, humanoid figure that is dark green in color with a bright green outline. Various bits of its body appear to be of a gel-like substance, while the rest is solid. It has a somewhat emaciated appearance, shown by its protruding rib cage and collar bones. It lacks a face, save for a lipless, open mouth, which shows its long teeth. It has no legs or feet, and its torso simply extends downwards, ending in a rounded shape. Its left hand is always held up, as if reaching for the player, while the right arm ends in a rounded stump at the wrist.

The Monster starts appearing in the game when the player reaches room 60. Once the player enters the room, they shall find a note laying on a table that reads:

After reading the note, Specimen 2 shall rise from one of the many puddles it has left behind, and start chasing the player. While slow, it is difficult to escape, for should one get too far ahead, it shall use of its puddles to teleport closer, these also greatly slowing the player down should they step in them.

If it manages to kill the Protagonist, the screen shall flash a distorted image of Specimen 2 along with the words, "I know what you have done, and what you have yet to do. But it's alright, because I'm inside you now. We are one but I am many..."

In the HD Renovation, its speed and power are the same, though some changes have been made in the game. Specimen 2 will not float though walls anymore, but can still float across cliffs. Hitting it with the axe will not knock it over anymore. Instead, Specimen 2 would lose a little bit of its health and collapse into a puddle. In spite of this, it would regenerate after a few seconds. If the player walks past one puddle before Specimen 2 enters the room, it instead enters through the puddle and not the door. 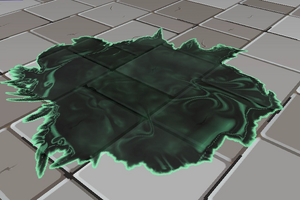 A puddle of slime left behind by Specimen 2. 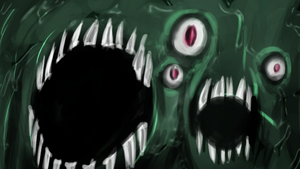 Specimen 2's death screen.
Add a photo to this gallery

Retrieved from "https://villains.fandom.com/wiki/Specimen_2?oldid=4056378"
Community content is available under CC-BY-SA unless otherwise noted.