Subject 5
The Spider
The Centipede

Specimen 3, also known as Subject 5, or the Spider or Centipede, is the third villainous-creature from the 2014 indie video game Spooky's Jump Scare Mansion.

The Specimen officially starts appearing from room 120, in which the player enters a laboratory in which creatures kept in glasses are seen. While one of the glasses appears to be broken, meaning Specimen 3 escaped from its containment. The player has to take a key to unlock the door, entering a room with a note on the floor and a hole on the ceiling. Once the player reads the note or approaches the exit of the room, Specimen 3 appears from the hole before chasing the player.

While chasing the player, several holes can be seen on the ceiling of the rooms. Specimen 3 will emerge from the first hole that the player walks past. If there are no holes available, it emerges from the door instead.

In the HD Renovation, Specimen 3 moves a lot faster than before. It can make holes in the ceilings and crawls out of them, making it easier for it to murder the protagonist. When it damages the player, it will scuttle about in a circle before chasing them again. Hitting it with the axe also causes it to move in a circle.

Also in the HD version, Specimen 3 has a death screen. Upon killing the player, they are shown lying on the floor with multiple holes on the ceiling. Multiple Specimen 3 come out from the holes before lunging and mauling the player to death. As the player lies injured, a flash of text appears reading "Once, In a land of dreams, I thought I could be free, But now the hunger never sleeps." 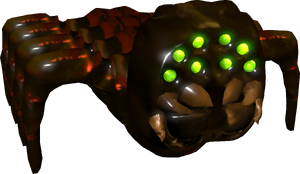 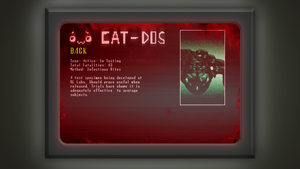 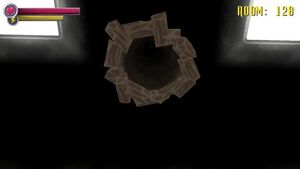 Specimen 3's hole.
Add a photo to this gallery

Retrieved from "https://villains.fandom.com/wiki/Specimen_3?oldid=4056427"
Community content is available under CC-BY-SA unless otherwise noted.