Specimen 4, also known as Ringu, is the fourth villainous entity and a major antagonist from the 2014 indie video game Spooky's Jump Scare Mansion. She starts chasing the player from room 166.

She has two forms in the Endless Mode. The first form appears to be much realistic and dangerously sinister than the original appearance. Her face appears to be much lighter and blood appears to be coming out of her lips. Her hair also appears to be more messier and lighter. While her legs appear to be naked and instead of the white sash, she wears a red belt around her waist.

The third form is quite similar to the second one, except she appears to be much more angrier, shaking in a very violent way towards the player, while she has four new extra arms appearing behind of her.

In the game, she starts appearing in an old abandoned Japanese school. In the school, the player could see black entities sitting or standing up just starting at the player. If the player touches them, the player will get damaged. At the end of Room 166, a rattle could have been heard, and Specimen 4 starts chasing the player.

In the Endless Mode, Specimen 4 can chase the player as her alternative forms. She moves faster than her original form, but slows down when the player looks at her. While chasing them, a static overlay creates a circle around the player, progressively becoming closer until a camera snap is heard that resets the overlay. Her jumpscare and death screen are the same as her original form.

In the HD Mode, Specimen 4 appears in Room 167 instead of Room 166. A black fog appears around her and has what appear to be scan lines on her body. She is capable of moving faster as well. When close to the player, her jaw opens, wanting to eat the player.

In the original version only, Specimen 4 is one of the three specimens that can be sacrificed to the Hellgate to shut it down, the others being Specimen 6 and Specimen 8. In the HD Renovation version, she is replaced by Specimen 11. Her chase sequence consists of her Endless Mode form in rooms themed after the Japanese school. If she kills the player, the same jumpscare is shown but also a new death screen, consisting of a television with a flesh-like tunnel through the screen. Japanese kanji is shown that roughly translates to "It's a hole made for you to enter." 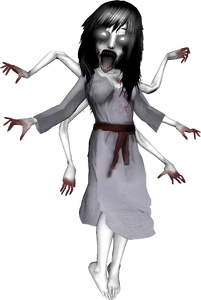 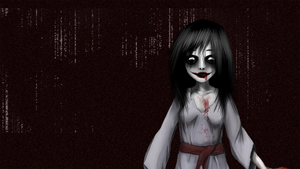 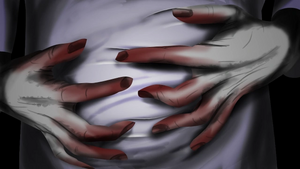 Specimen 4's death screen.
Add a photo to this gallery

Retrieved from "https://villains.fandom.com/wiki/Specimen_4?oldid=4020004"
Community content is available under CC-BY-SA unless otherwise noted.