Specimen 5, also known as Babs, is the fifth guard and a major antagonist from the 2014 indie video game Spooky's Jump Scare Mansion.

Specimen 5 is a faceless, humanoid creature that is entirely pale in color. Its body appears feminine in shape, and wears no clothes or accessories of any kind. Certain areas of its body, such as its face and limbs, also carry darker shades, presumably from lighting.

Natural marks are visible across Specimen 5's body, signifying age in an organic or inorganic way. Its texture/composure is similar in appearance to paper, clay, parchment, wood, etc.

Specimen 5 wears no clothes or accessories of any kind. The specimen also lacks hands, and its arms end at stubs. It carries a large reddish-brown blade attached to its right arm, which appears to be tipped with blood.

Specimen 5 would appear at the end of Room 210. Its arrival is forewarned by a heavy fog. As it chases the player, it can create hallucinations that cause the walls to be covered in what seems to be blood, being used to try and hide the doors to prevent escape. Although slow, it is incredibly powerful, able to kill the player with just two strikes. Should it manage to do so, the screen will show Specimen 5 standing in front of a red pentagram, its face covered in many small holes that seem to be eyes, alongside the message,

"Tiny, Shining holes in the sky.
Delicate, perfect emptiness.
Black, growing absences of life.
Cold, swarming death.
And we shall become them."

In the HD Renovation, its speed has been increased and Specimen 5 has the ability to knock the doors down when entering a room, leaving it down on the floor with no remorse. 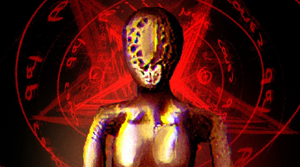 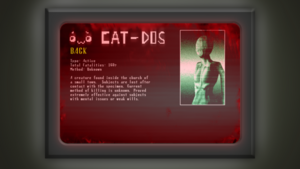 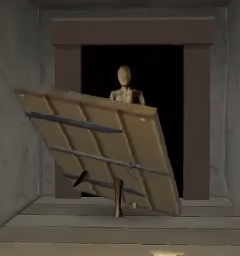 Specimen 5 breaking down a door. 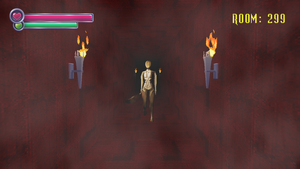 Specimen 5 chasing the player while the room changes appearance.

Retrieved from "https://villains.fandom.com/wiki/Specimen_5?oldid=4010419"
Community content is available under CC-BY-SA unless otherwise noted.