Creating handmade dolls from anything (including human corpses).

Kill any intruders in the Manor as part of Spooky's obstacles and turn them into human puppets.

Specimen 6, also known as Ben in the game files or nicknamed The Merchant by fans, is the sixth guard of the 2014 indie videogame Spooky's Jump Scare Mansion.

Specimen 6 appears to be a thin wooden doll puppet. His eyes are totally white in color, without any other expressions on them. While his eyebrows appear to be very thin, and he is always smiling with a toothy grin. He is wearing a simple brown top, gray pants, and black shoes. He appears to be having a needle in his hand which he carries to murder the player.

In an unnamed town, there was a merchant who would make homemade puppets and trinkets for the children. His business became so successful that the other shops started failing. Envious, the shopkeepers threw the puppets into the river. The merchant dove into the river to save his "drowning children", but drowned in the process. While not what the shopkeepers wanted, they were satisfied anyways.

Over the years, the children of the town disappeared, and puppets would be found around the river that resembled the missing children. Long after the residents abandoned the town, a life-sized puppet would be found in the river, resembling the merchant himself.

His first appearance starts from Room 310, in which Specimen 6 would stay still and just stare at the player, letting the player explore his room.

"To become a puppet is to rid oneself of the pain and harshness of choice. Now nothing you do is your fault, now you belong to something... You belong to me..."

Specimen 6 has the ability to teleport much more then the original, and if the player stares at him for too long, he will start teleporting towards the player. When Specimen 6 is behind of the player and when he is prepared to make damage to the player, he would start to laugh rapidly in joy.

Either Specimen 4, Specimen 6, or Specimen 8 can be sacrificed to the Hellgate to shut it down. His chase sequence consists of rooms similarly to the temple he was first encountered although with shadow puppets hanging from the walls. Specimen 6 can still be knocked down with the axe, but he will rise back up after a few seconds. Should Specimen 6 kill the player, the death screen is identical to the original, but with different text:

"My children drowned. So I took theirs for mine. I sew them all up, with long silver twine. I use my wood drill, to bore out their eyes. Speak not my child, I'll silence your cries." 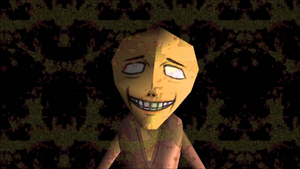 Specimen 6's death screen.
Add a photo to this gallery

Retrieved from "https://villains.fandom.com/wiki/Specimen_6?oldid=4059066"
Community content is available under CC-BY-SA unless otherwise noted.