Enforcer for the Order of No Quarter (formerly)

Specter Knight is a major antagonist in the indie videogame Shovel Knight, as well as the main protagonist of the prequel DLC Shovel Knight: Specter of Torment. He works for The Enchantress as one of the eight members of the Order of No Quarter. He is encountered by Shovel Knight at the end of the Lich Yard.

Specter Knight was once a knight called Donovan. Along with his friend Luan, the two went to the Tower of Fate, seeking to obtain a magical amulet to help Luan's son, Reize. Upon reaching the place, they find the amulet, but before they can get it they are stopped by Shield Knight, who went to the Tower to destroy the amulet, warning the two that it was cursed. Donovan ignores her, however, believing she only wanted the amulet for herself. The two fight each other, but the tower starts crumbling around them. Luan implores Donovan to give up the amulet and leave the place, but he insists on taking it, resulting in all of them getting caught under the debris. When Donovan comes to his senses, he sees that Luan is dead and he himself is fatally wounded, but then the Enchantress appears before him and offers him a chance to become her servant in exchange for allowing him to live. Seeing he didn't have much of a choice, he accepts her offer, so she transforms him into Specter Knight and gives him the amulet. She tasks him with recruiting eight knights for her Order of no Quarter, and with each knight recruited the amulet would grow in power, thus allowing to restore his own life.

Specter Knight starts recruiting the knights to form the Order, but during his mission, he is confronted by Reize, who invades the tower in an attempt to destroy the evil gathered there. The Enchantress appears and uses her powers to corrupt Reize and turns him into one of her minions. Specter Knight is ordered to test Reize's abilities, after which she tasks Reize with keeping the magic mirror Specter Knight uses to pursue the knights. After he successfully recruits seven knights, he is confronted by the Black Knight, who recognizes the Enchantress as being Shield Knight. After learning this, Specter Knight decides to take revenge on the Enchantress because he blamed Shield Knight for the accident that cost him his life as well as Luan's.  He confronts her, but she summons Reize and grants him even more power, transforming him into a large demon called Nightmare Reize. After Specter Knight defeats him, the Enchantress decides to make Reize a part of her order. Specter Knight intervenes, offering himself to become her last knight, which she gladly accepts. With the amulet fully powered, Specter Knight uses its power to save Reize, who he then takes to the nearby village. As he reminisces about what happened, it is revealed that Reize is Luan's son.

Regardless of what Shovel Knight chooses to do, they are all shown in the epilogue during the credits, with some of them reforming and others paying for their actions. After Shovel Knight and Shield Knight defeated The Enchantress, the Specter Knight returned to the Lich Yard. There, he set a party for all of his undead servants. They considered Specter Knight the "life of the party".

Specter Knight appears in Super Smash Bros. Ultimate as an Advanced-level primary attack-type spirit. His spirit battle is against Richter Belmont on the Bridge of Eldin stage equipped with Death's Scythe and increased movement speed. Alternatively, he can be automatically obtained by scanning the Specter Knight amiibo. 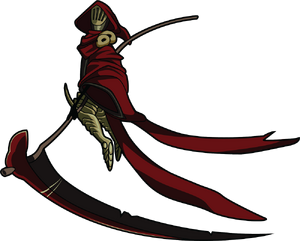 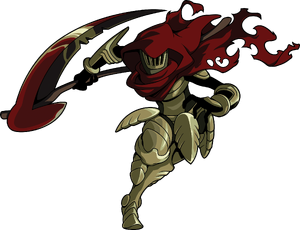 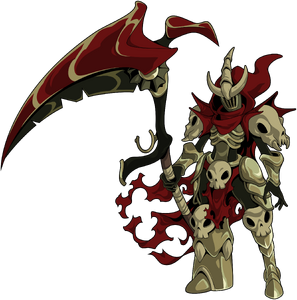 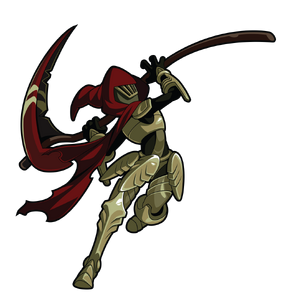