Spectrus is a skilled magician who manages to hypnotize people managing to make them execute orders they want or believe them to be another person or an animal. His first appearance made ​​her the eighth chapter of the saga In search of the Star Stone, with texts by Bruno Sarda and drawings by Massimo De Vita.

Spectrus wears a unique costume fire-engine red, on the chest there is a section in a diamond shape and yellow color depicting a green snake in the shape of "S" (the initial name of the villain); the head is covered only up to the hair from which two small horns sprouting from goat; his face is characteristic for its big nose and the white goatee on his chin.

On hands wearing a pair of yellow gloves, foot two big boots blacks and back there is a small blue cloak. In the last few stories recently made ​​about Mickey Mouse, Spectrus has changed a bit 'look at his beginning with his physical form: not more slender but a bit' strong.

The costume is not only a suit but a leotard, arms remain face and hands are covered by two de red gloves; also the coat has become a bit 'bigger than previously worn, and yellow. The small horns have become larger, long and red, they are also the most obvious small mustache blacks compared to its previous version.

Spectrus appears during the hunt twelve medallions of the Star Stone; the evil lurking at the airport and thanks to a dress journalist, infiltrates between security officers awaiting the arrival of an airplane. The villain manages to knock out the cops so hypnotizing manages to steal the gold cup made ​​by the sculptor Momigliani and snatch from the hands of Donald, the pendant of Capricorn just recovered, because the duck is back to Duckburg to deliver the medal to his uncle.

Paperinik decides to intervene to resolve the issue because his uncle besieging the house of Donald hoping to make it out of the residence to ask for an explanation of what happened; the masked duck reassures the parent that will resolve the matter as it begins to lurk in the city in search of the illusionist. Meanwhile, Spectrus begins to fulfill ins with great ease thanks to his powers until he went to a major theatrical work where, during an attempted robbery, clashes with Paperinik but manages to defeat the hero mistaking its various copies and ultimately hypnotizing.

The masked duck, after being humiliated in public, decides to set a trap all'illusionista and with the help of the sculptor Momigliani, lies in a seeming golden statue waiting for the theft of the robber. During the robbery the paladin does come out of a box a cardboard cutout with its image in the direction of the statue which is hidden, so manages to film the moment when Spectrus hypnotizes the shape of a tarp and fell suddenly casts registration previous hypnotizing Spectrus. So Paperinik unable to retrieve the pendant and deliver Spectrus to justice. 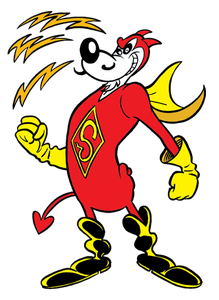 Spectrus
Add a photo to this gallery

The den of Spectrus is located in an old fake tree that hides a lift inside. The elevator leads to an underground room where Spectrus retains the spoils of rapine and national newspapers to keep up to date on the possible future strokes.

Retrieved from "https://villains.fandom.com/wiki/Spectrus?oldid=3709385"
Community content is available under CC-BY-SA unless otherwise noted.