Villains Wiki
Register
Don't have an account?
Sign In
Advertisement
in: Ninjas, Male, One Punch Man Villains,
and 30 more

Surpass Saitama and defeat him for good (ongoing).

Speed-o'-Sound Sonic, or simply Sonic, is a recurring antagonist from the manga/anime series One Punch Man. He is a master of ninjutsu who can move at the speed of sound. Ever since his first encounter with Saitama, he has grown a huge rivalry for him, and has now become hellbent on defeating him.

He is voiced by Yūki Kaji in the Japanese version, and Erik Scott Kimerer in the English dubbed version.

Sonic is a fighter who is easily consumed into battle. He gains pleasure from not only being involved in fights, but winning the fights at that.

Though he accepts that there are heroes and villains that are stronger than him, he refuses to be lower than him. He is a very determined man who will go out of his way to surpass others, including his rivals.

Despite his cold presence, he does have a side of compassion for others. Sometime after his first encounter with Saitama, he spent his time with a bear hunter named Frank, who grew a nice bound with him. Around this time, he also befriended a piglet which he later named Ino.

Sonic was first hired by Mr. Monier as bodyguard, where he was assigned to defend him from a group called the Paradise Group. Sonic later encounters them, dispatching them with ease, including their leader, Hammerhead. Hammerhead managed to escape, however, and so Sonic began searching for him. Instead, he came across Saitama.

Despite Saitama's claims, Sonic believes that he's part of the Paradise Group and begins a battle with him. Despite his best efforts, however, Saitama was able to react at every movement of Sonic, easily catching him off guard. Their battle eventually ended, with Saitama accidentally ramming his fist into Sonic's testicles. Barely standing, Sonic declares that Saitama's next encounter with him will be his last, before taking off.

Sonic later encountered Saitama in the city, who was desperately searching for tasks to do. Sonic attempted to challenge him to a battle, but because of how occupied Saitama was, he refused. Angered, Sonic attempted to slash through him, only for his sword to suddenly be split in half. Saitama then threatens him to leave him be before he gets punched, causing Sonic to be spooked.

Eventually, the C-Class rank hero, Tank-Top Tiger attempted to stop Saitama, as he's been accused of harassing people. Sonic interrupted him, however, refusing anyone to take away Saitama. Sonic then proceeds to attack civilians and cause damage. Eventually, Saitama was able to dispose of him easily, slamming him into the ground.

Sonic was arrested and sent to the prison but managed to escape, along with Puri Puri Prisoner. The two eventually reached to the city where they encountered the Deep Sea King.

In addition to his abilities, Sonic possess a variety of ninjutsu moves from his training. He also carries a variety of weapons such as shurikens and a ninjato. 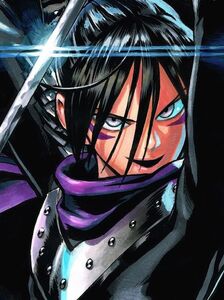 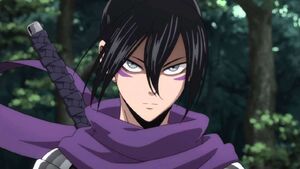 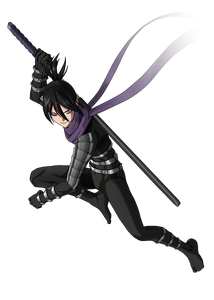