Scare humans into avoiding him so he can become "king of the roads".

Speed Demon, formerly just a normal car, is the main antagonist of the 2012 TMNT Season 3 episode, Race with the Demon and the posthumous overarching antagonist of "Eye of the Chimera".

He was voiced by Steve Blum.

Speed Demon started out as a regular inanimate car belonging to an unknown driver.

He ended up getting mutated in the episode "The Croaking" when a jar of mutagen wound up in the middle of the road after the Punk Frogs' tree burnt down during their fight with the Turtles. The unknown man drove right into said mutagen, thus making his car become sentient. This now-living car possessed the man driving him, named itself Speed Demon and began terrorizing the highways.

Later on in "Race with the Demon", Donatello, Casey, and April were on their way back from grocery shopping when Speed Demon came and tried to force them off the road. Casey was the one driving, and of course, he was going to fight back. When Speed Demon got away and humiliated Jones, the teenage boy was determined to take the road maniac down.

The next day, Casey finally got the old car in the barn working. He and Donnie took it out for a test drive, only for Casey to go looking for Speed Demon afterwards. Soon he found him, and managed to keep up. While looking at Speed Demon's driver window, the inside lit up and revealed the driver inside as a horrid mutant! Casey was shocked, but the mutated human inside immediately changed the subject. Both wanting a rematch, they raced and Speed Demon did not play fair. After Casey saved a blind old lady from getting wrecked, Speed Demon scolded his opponent and vowed to slaughter every driver out there until he's the only one left.

Casey was then smashed into some boulders, and Speed Demon got away again. When Donnie, Raph, and Mikey arrived with the Party Wagon, Donnie was furious at Jones not only for wrecking the car but also for going after the Demon alone. Casey explained that Speed Demon wasn't even a road maniac, but more like a road mutant. Mikey then noticed Spee d Demon's mutagenic fuel on the concrete, and Donnie collected some in a vial.

Later, Donnie and Casey agreed to put their differences behind each other and team up. Reinforcing their car with Kraang technology confiscated from the Kraang Stealth Ship in the basement, they named it the "Turtle Racer". However, Donnie still had to fix an error in the onboard computer system. Meanwhile, an unattended chicken came into the barn and got into Donnie's container of Speed Demon's gasoline. The chicken mostly remained normal, but it's brain became so big to the point where it was outside the skull! This meant becoming much smarter, and she proved to be the perfect alternative to artificial intelligence. Mikey naming her "Dr. Cluckingsworth M.D.", she took the role of navigator.

Challenging Speed Demon for the 3rd time, they finally managed to seize the driver within and yank him right out of his car. But then the one-eyed freak turned out to be just a normal human, and Donnie realized the car was the mutant! Unfortunately, it was too late. Donnie turned to see Speed Demon behind him, who opens his hood to reveal a gaping mouth. Swallowing Donnie whole, he took control of his new driver. He also gained rear hydraulics, a supercharger and a torn roof since Donnie was now huge and sort of resembling Rat Fink.

Casey was forced to continue the chase in order to save Donnie. When he made them both crash into the railing on the road, Speed Demon made a deal. They would race for Donnie, and if he won then Casey would be his new driver and he would get all the technology built into the Turtle Racer for himself. It was accepted, but Casey really didn't care about the race. Driving in front of Speed Demon and letting the Turtle Racer run on autopilot, he had it drive in reverse to face the enemy. With a jump, he grabbed Donnie and pulled him free. After Donnie was back to normal, Speed Demon cornered both of them and was about to kill Jones. Donnie blocked the car and kept the hood open with his staff, only to get thrown off as the Demon turned. When he charged again, he was rammed in the side by the Party Wagon and shoved over the cliff. He made a vow to return but then exploded.

The protagonists presumed this took care of him, but little did they know that was not exactly the case. A hawk had been flying around and grabbed a fish who had eaten a worm. During Speed Demon's explosion, his mutagenic fuel splattered everywhere and hit these three animals. He is last seen after his corpse landed somewhere in the woods. Near him, the bird, worm, and fish combined into one with disaster to come...

After coming to life, he gained these mutant powers: 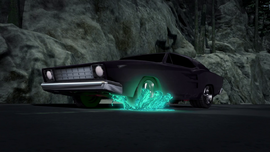 Last moments as a normal car. 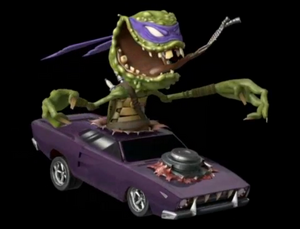