Speeda Demon is an antagonist who has recently been broken out of the Hero Factory prison.

He was voiced by Charlie Adler, who also played Corroder in Hero Factory, and Starscream in the Transformers movie series.

He then traveled to the ice planet Kollix IV and Preston Stormer is send to recapture him. He was heading for northern pole to knockout the Interstellar Pole and so incoming ships having problem landing on the planet, which he can raid them and end up racing against Stormer 4.0.

He crashed his Nitro-motorcycle from being attack by Hero-Cuff, that cuff his hand to handle bar.

Speeda Demon is very skilled on his nitro-rocket motorbike and loves doing daredevil stunts, move around with speed and reckless. He is green in color, has four arms and can carry his sword blades and drive his motorcycle backwords. He is completely insane, trickey and careless, constanly cackles and violet towards kill-joyes that stop from riding his Nitro-Rocket Motorcycle. 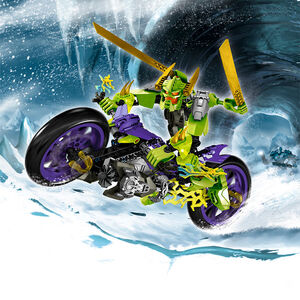 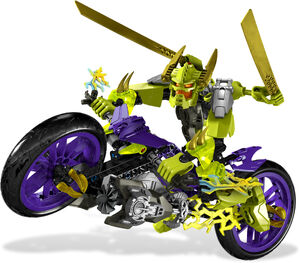 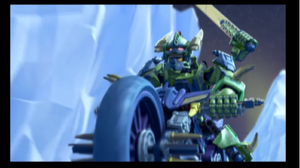 Retrieved from "https://villains.fandom.com/wiki/Speeda_Demon?oldid=3709017"
Community content is available under CC-BY-SA unless otherwise noted.