Manipulative Supervillain
Spellbinder is a minor antagonist in DC Comics. He is mainly a foe of Batman's, and there has been currently four holders of the Spellbinder mantle.

Delbert painted pop art and then wanted to use his talents for crime. On his first heist Delbert fought Batman but, he quickly hypnotized him. Delbert did this for his second heist, too. On the third one Batman beat Spellbinder and sent him to prison. He then fights Superman. He develops a sonic blast that will render anyone including Superman to his hallucinations. Superman then fights Spellbinder and then hitting him with his own blast.

He then joins a group organized by The Monarch of Menace. Batman captures Spellbinder then dresses up as him to infiltrate The Monarch of Menace's group. After that he is with his girlfriend Fay Moffit when, the demon Neron comes and offers Delbert to trade his soul for immense power. He rejects Neron's offer but when he walks away Fay shoots him in the head. She then accepts the offer and becomes Lady Spellbinder.

This unnamed Spellbinder appeared in Justice League International (vol. 2) #65 as a member of the "Justice Busters".

After Fay killed Delbert and became Lady Spellbinder she had got the power to cast real illusions. She then fought Batman and Robin. They did not know the extent to her powers. They were fully blinded by her powers. She was then taken down by Batman when Robin had a virtual reality machine that acted as Batman's eyes. She figured out that if she was blinded she could not cast a hallucination spell. She would

then start to fight the Birds of Prey. She made Barbara Gordon think that she was Batgirl again. She hired Blockbuster  to capture her. Barbara defeated Fay by blinding her with a fire hydrant, and then hitting her with a club.

Black Canary was taking many supervillains including Lady Spellbinder to prison but, they got teleported to Apokolips. The villains then fought Parademons with Black Canary. Then they came back to Earth and were sent to Slabside Penitentiary. In the miniseries The Joker's Last Laugh, Lady Spellbinder is one of the many villains to be infected with the Joker Venom. Lady Spellbinder was killed alongside The Trigger Twins during Infinite Crisis.

Ira Billings is exclusive to the DCAU. He first appears in the episode Spellbound. He was a psychiatrist at Hamilton Hill High but, he felt underpaid. He made a plan to mind control wealthy kids to steal their riches. The first child he attacked was Chelsea Cunningham. Chelsea threw an artifact that was important to her father in a volcano. Spellbinder retrieved the artifact some time later.

Spellbinder appears under the name of Viktor Mironov. He is a Russian magician known for the power to attack someone's mind. Constantine asks Viktor to join him to fight the Cult of the Cold Flame At first he didn't believe Constantine but after seeing his mind he believed him and joined their team. When they attacked the Cult of the Cold Flame, Spellbinder and another wizard died because they didn't know that Constantine was sent to another time period. 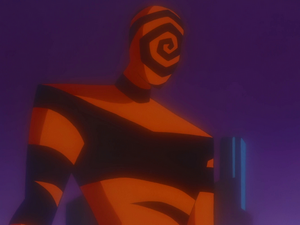 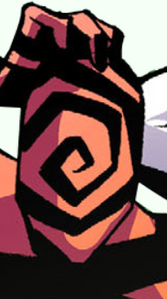 Retrieved from "https://villains.fandom.com/wiki/Spellbinder_(DC)?oldid=3982967"
Community content is available under CC-BY-SA unless otherwise noted.