Make more money and seek revenge on those who wronged him.

Ira Billings, also known as the Spellbinder, is an antagonist in the DC Animated Universe. After feeling that he deserves more in life, he decides to use his skills for his evil purposes, especially to accumulate wealth.

He was voiced by Jon Cypher.

As a high school psychologist at Hamilton Hill High, Billings felt that he was unappreciated and underpaid while helping troubled children deal with their problems. To that end, he later devised a plan to mind control wealthy students to steal valuables from their parents. His first victim was Chelsea Cunningham, a classmate of Terry McGinnis (Batman), whom he made believe she was experiencing a jungle exploration in search of an artifact, which was, in actuality, a valuable statuette that belonged to her father. He had Chelsea throw the "artefact" in a volcano, but in truth it was a local stream from which Spellbinder later retrieved. As Ira Billings, Spellbinder covered his tracks by describing Chelsea's actions as a means of gaining attention from her distant father. The following night, Spellbinder brainwashed the father of another student. The man was working as the curator at the Gotham City Museum of Fashion. Spellbinder made him believe he was in a jungle war zone trying to save a fellow soldier, but in reality the man was carrying for the villain a priceless gown out of the building. Later that week Spellbinder infiltrated the wedding of the mother of yet another one of Terry's friends, and made her believe she was on an alien planet. She threw her jewelry off, believing them to be insects, thus allowing Spellbinder to retrieve them.

Billings summoned Terry to talk to him about the radical changes in his life following the death of Terry's father, Warren McGinnis. But really Billings wanted information on Bruce Wayne (the previous Batman) and his valuables. Later that night, Terry was brainwashed by Billings under the guise of "Spellbinder" (as the media had dubbed him). Terry was stealing from Wayne, believing himself to be participating in a supermarket-themed game show. Terry was eventually snapped back to reality and chased after Spellbinder. With the help of Bruce, Terry was able to overcome the villain's mind control technology, defeated and unmasked Spellbinder who was later arrested.

Months later, Spellbinder created illegal VR rooms which offered runaway teens their idealized version of their lives, but under the condition that they work for him as thieves. Addicted to the machine, they agreed to steal, but also to bring in new teens in order to replace those who had been rendered comatose do to serotonin overdoses, the adverse result of the VR. Maxine Gibbson, an associate and sidekick of Batman's, who was investigating the disappearance of the same teens was brought in on the VR craze and as a result became addicted to the VR rooms after hooking her up to one.

In her fantasy world Maxine still lived with both of her parents (her father left following a divorce, while her mother was usually gone on business trips) and her older sister, with her family being very supportive of her over-achievements. Terry followed one of the addicted teens (a runaway boy from his High School) to the Spellbinder's hideout, an abandoned medical clinic. He tried to bring Maxine to her senses, but she wouldn't listen, believing that her fantasy was more welcoming then reality. Batman was ambushed by Spellbinder, who then tried to fry Batman's brain, but Maxine had came to her senses and electrocuted Spellbinder, who was later arrested.

Spellbinder escaped prison yet again and tried to frame Batman for murder as revenge for having foiled his previous plans. During Batman's fight with the terrorist Mad Stan, Spellbinder projected an illusion to Commissioner Barbara Gordon in which Terry had killed Mad Stan, thus making him a fugitive of the law and Mad Stan, a pawn in Spellbinder's plan. With the help of Bruce Wayne, Batman was able to clear his name after exposing Spellbinder in front of the commissioner, revealing his plan. As Spellbinder was being apprehended he momentarily stopped to mock Gordon, telling her that his plan had worked so easily because she was prepared to believe the worst possible outcome. Eventually the police were able to find Billings' pawn, Mad Stan, who was being held inside one of Spellbinder's VR rooms, dreaming of his ambition of destroying Gotham City Hall, thus ending "the bureaucratic nightmare", much to the police's bewilderment.

Following his crime spree, Spellbinder, alongside Blight and the Royal Flush Gang, had became an idol for half of the grade school children of Gotham, with the other half idolizing Batman. Dak (Darius Arthur Kelman), a runaway orphan, was one such child and brought up his admiration of Spellbinder and the other rogues while being trapped underground alongside Batman.

As a trained child psychologist Billings was able to procure sensitive information regarding his patients' parents' valuables and as a result was able to device intricate plans for his thefts. Billings was also gifted in the field of virtual reality technology that was able to induce life-like hallucinations ranging from nightmarish to idyllic. His primary weapons of choice was either the eye located on the palm of his left hand, or an eyeball shaped sphere which feeds hallucinations inside the victims mind. This technology not only could induce visual and auditory illusions, but also induce fake smells. Spellbinder used one such projection against Batman, causing him to believe that he was leaping from a cliff towards a waterfall's basin, in actuality he was falling towards the traffic street bellow. Terry recounted that during said hallucination that he could smell the water.

With his knowledge of VR technology, Spellbinder created VR machines that could induce intense levels of happiness by making the people inside the machines experience their fantasy life, for instance Maxine believing that she was still living with her entire family, or one boy believing himself to be an influential hit rock star. However, this machine caused massive overdoses of serotonin in the brain which eventually caused the users to fall into comas. The machines also proved to be highly addicted and prolonged absences from them caused withdrawal.

Spellbinder also proved to be a master of stealth able to allude his pursuers with ease. He would often combine stealth alongside his mind control technology and holograms. During their chase through Wayne Manor's garden, Spellbinder hid behind trees and was able to get behind Batman and threw one of his eye-shaped spheres at him, causing Batman to endure a zombie hallucination while Spellbinder began beating Batman. He also almost managed to trick Batman into falling off a cliff after tricking Batman with a hologram of himself. Spellbinder's eye-spheres could also be used to grant him a form of invisibility, as Spellbinder could stand in an open crowd next to several Gotham policemen without being noticed and even hid near Batman while the latter was searching for Mad Stan at the Gotham morgue, following Mad Stan's alleged murder. The invisibility could be cancelled if someone was looking at him while wearing infrared lenses, flashed ultraviolet rays at him, or if the eye-sphere was destroyed. During the wedding scene in the episode "Spellbound", Spellbinder disguised one of his eye-spheres as a photo-camera so as to hypnotize the bride without being caught. 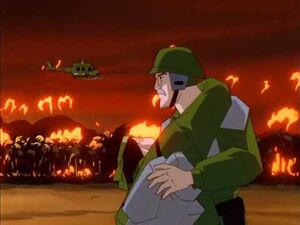 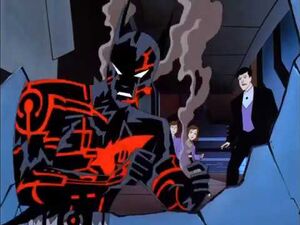 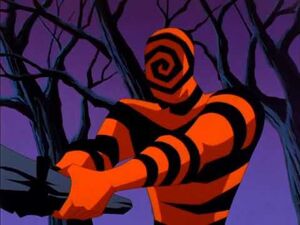 Batman Beyond vs Spellbinder 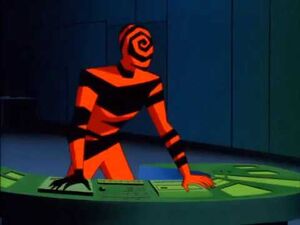 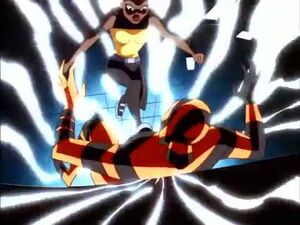 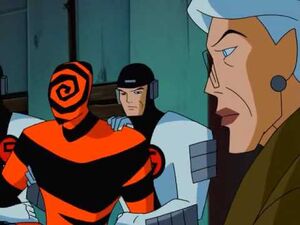