To protect the Liars from "-A"(succeeded)

Spencer Hastings is one of four main protagonists in the television series Pretty Little Liars. However, in the third season, she becomes a secondary antagonist after joining the "A-Team" to find answers on Toby.

After finding out that her boyfriend, Toby Cavanaugh, is working with Mona Vanderwaal, and then finds him supposedly dead, she begins a descent into darkness. She is admitted to Radley Sanitarium, where she is visited by Mona, who convinces her to join the The "A-Team". Spencer agrees to this, as she wants to find out if Toby is really alive, as Mona claims.

In order to prove herself to Mona and A, she kidnaps Malcolm Cutler from his karate lessons and takes him to the festival. She also spies on Jenna Marshall and sets up the Lodge party for Red Coat.

After she finds out that Toby is really alive and actually playing on Mona's side in order to protect Spencer, she decides to use her newfound membership to help the girls stay one step ahead of Red Coat's plan.

Spencer and Toby go to the lodge with Mona, while the girls sneak in from the outside. In order to trick Mona so that they can go outside and see Red Coat, Toby pretends that he is going to kill Spencer and drags her outside. The pair go out into the woods, where they see someone with a flashlight, which Toby goes to investigate, while Spencer goes to see Red Coat. While the girls and Mona are inside, someone locks them in and sets fire to the lodge. The girls are trapped inside but are saved at the last minute by Red Coat, whom Hanna sees to be Alison. After "A" realizes Spencer and Toby betrayed him, he kicks them off the team.

In the series finale of the show, it is revealed that the final "A" is Spencer's twin sister Alex Drake. 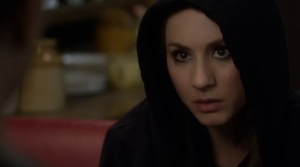 Spencer as "A".
Add a photo to this gallery

Retrieved from "https://villains.fandom.com/wiki/Spencer_Hastings?oldid=4346725"
Community content is available under CC-BY-SA unless otherwise noted.