Villains Wiki
Register
Don't have an account?
Sign In
Advertisement
in: Magic, Evil from the Past, Giant,
and 30 more

The Sphinx is a minor antagonist in My Little Pony: Friendship is Magic, only appearing in a flashback in the episode "Daring Done?".

The Sphinx is similar to the traditional sphinx in Greek mythology: The body of a lion, wings of an eagle, and the head of a female, except in this case, the face resembled that of a mare rather than a human woman. Also, she had a purple coat and her head had sharp teeth, yellow eyes with slits, and an Egyptian headpiece with earrings.

The Sphinx was a selfish and uncaring beast, forcing an entire village to offer her a majority of their crops while hardly leaving any left for them. She hates when those she oppresses stand up to her, but is quite sporting and offers challenges to those brave enough to accept. She especially hates to lose but will honor those victorious nonetheless.

The Sphinx was large, quite strong, and had wings to fly. She could also use magic, which allowed her to conjure a blindfold and cast a powerful spell that prevented any pegasus from flying in her temple, which lasted over a millennium.

Long ago, an unnamed village was terrorized by the Sphinx, who demanded a tribute of crops in exchange for sparing them of her wrath. It was not until a pegasus by the name of Somnambula started giving up what little she had to give the ponies food and hope that the son of the pharaoh, Prince Hisan, mustered the courage to stand up to the beast. Enraged, the Sphinx grabbed Hisan in her paw and whisked him back to her pyramid as her prisoner, and declared to his father that she will only set him free if anyone can solve her riddle.

Somnambula was the only one brave enough to volunteer to save the prince. Upon reaching the pyramid and confronting the creature, the Sphinx gave her the riddle, to which Somnambula correctly answers, "Hope". The Sphinx became so enraged that it was likely that she would not release the prince, so Somnambula asked her for another challenge, and if she would succeed, the Sphinx would leave the kingdom for good. The Sphinx agreed declared that the challenge would be to simply "walk to the prince", but across a deep chasm while blindfolded and unable to fly. Despite these conditions, Somnambula never gave up hope and allowed the prince's voice to guide her to him. Defeated again, the Sphinx angrily lept into the skyline of the pyramid and flew off, never to be seen or heard from again. 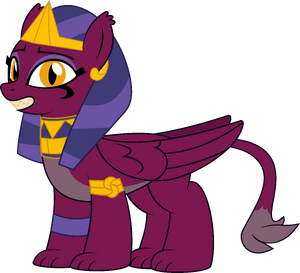