Leader of the Demi-Human Alliance (formerly).

Become like her creator by completing her mind (ongoing).

Sphinx was a replica of a half-elven girl named Ryuzu Meyer created through magical methods over four hundred years ago by the Witch of Greed Echidna. Echidna had sought to gain immortality by transferring her soul into the body of one of Ryuzu Meyer's replicas, and, as Sphinx was the first replica created, it was her whom Echidna attempted to possess. However, unfortunately for the Witch of Greed, her soul was too large for the body of Sphinx to contain.

Ultimately, Sphinx was only able to absorb a portion of Echidna's memories, resulting in a replica whose mental state was severely distorted. Sphinx was abandoned by Echidna, who continued to experiment on Ryuzu Meyer by making many more replicas. With no purpose, Sphinx began wandering the world in the hopes of becoming complete like her creator. Fortunately for her, the replica of Ryuzu did inherit a large portion of her creator's knowledge on magic, making Sphinx a potent mage.

Centuries after her creation, Sphinx became one of the three leaders of the Demi-Human Alliance alongside Libre Fermi and Valga Cromwell. The Demi-Human Alliance was am enormous insurrectionist force comprised entirely of demi-humans hellbent on the destruction of the Kingdom of Lugunica. The brutal civil war between the Alliance and Imperial Knights of Lugunica raged on for years and engulfed the entire Kingdom. Seven years into the Demi-Human War, Sphinx, Fermi, and Cromwell were defeated during an incursion in the Lugunican Royal Palace. However, unbeknownst to the forces of Lugunica, both Sphinx and Cromwell survived.

Despite being around four hundred years old, Sphinx perpetually maintained the body of a girl roughly ten to twelve years of age. Her dark cyan eyes and charming face usually proffered an emotionless expression befitting of her mental state. As a half-elf/half-human hybrid, Sphinx's ears were distinctively pointed. She had long fluffy light-pink hair that curved outwards at its ends and trailed down to her hips. As a replica of Ryuzu Meyer, she was physically identical to the original and all of the other copies.

The only thing Sphinx wore over her body was a long white robe. Even her feet were left completely bare. Despite her innocent physical appearance, Sphinx radiated a massive aura of malignance and malintent that indicated her existence as abominable. Her demeanour of evil was so powerful that Sphinx had no way of hiding it.

Ryuzu Meyer was a young half-elven girl around twelve years of age that became indebted to the Witch of Greed Echidna. The Witch, with Ryuzu's permission, began experimenting on Meyer in a secret laboratory. Echidna sought to unlock immortality by cloning Meyer and transferring her consciousness to the clone, meaning she could live for ever through a long line of different clone bodies. She was able to create the first five clones of Ryuzu, the first of which she decided to transfer her conscious into. However, the quantity of information contained within Echidna's soul proved too much for the clone body to handle, resulting in an emotionless girl with a fractured mind who possessed a vast amount of magical knowledge and power, albeit not close to the level of Echidna herself.

The girl left the laboratory and journeyed into the world with the hopes of gaining a full mind. For the next few centuries the rogue clone, now known as Sphinx, travelled the world in relative obscurity. Around three hundred and fifty years later, Sphinx became involved with the Demi-Human Alliance, a large insurrectionist force based within the Kingdom of Lugunica. The Alliance, made up entirely of the marginalized demi-human races, sought to reap the blood of their oppressors, starting a civil war as a result. Alongside the giant strategic mastermind Valga Cromwell and the master duellist Libre Fermi, Sphinx was considered one of the heads of the Alliance, although her involvement was kept relatively secretive.

Two years into the civil conflict known as the Demi-Human War, Sphinx planted numerous magical circles around Castour Field (the site of an upcoming battle) at the behest of Valga Cromwell. These magic circles exploded when triggered by a person walking over them much like a landmine. During the Battle of Castour Field as it became known, Sphinx's magic circles worked with brutal efficiency, laying waste to the Lugunican army and contributing to the Demi-Human Alliance's subsequent victory.

Roughly forty years after the end of the Demi-Human War, Sphinx was mentioned by Ryuzu Bilma, one of the other four original clones of Ryuzu Meyer. Bilma, like the other four, had remained in the territory surrounding the laboratory for the last four centuries. One night, she indirectly mentioned Sphinx to the Japanese teenager Subaru Natsuki whilst explaining the origins of Ryuzu's various clones. Bilma also mentioned Sphinx's apparent death at the hands of Roswaal J. Mathers. 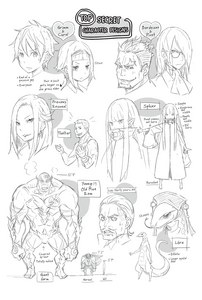 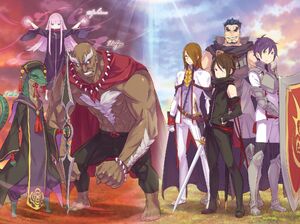 Sphinx and the other Demi-Human Alliance leaders were seen as the figureheads of the Demi-Human War. 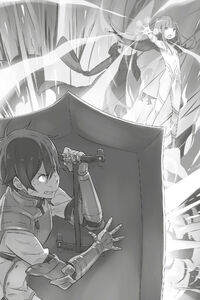 Sphinx firing her most powerful light magic spell against the shield of the Lugunican soldier Grimm Fauzen.