To help Two-Face and the Riddler

Spice is one of the two secondary antagonists of the 1995 superhero film Batman Forever, and one of Two-Face's love interests (and eventually henchwomen), the other being Sugar.

She was portrayed by Debi Mazar, who also portrayed Regina in Beethoven's 2nd.

Spice likes to stay on Two-Face's sinister side. She has a cruel nature, and her personality is the exact opposite of Sugar.

However, she likes Two-Face very much, and Two-Face loves her as well. Early on, she made Two-Face very happy by cooking him his favorite food (which was revealed to be a charred heart of black boar, a side of raw donkey meat and a Sterno and grain alcohol). Two-Face was even shown to prefer Spice over Sugar, and the two even shared a kiss in one scene.

She also likes the Riddler and found his plans very interesting. He offered her major help as his Princess of Puzzles at the end of the film. Spice is a beautiful woman; while Sugar preferred frills and feathers, Spice likes to wear black leather, tattoos and fishnet stockings (as well as carry a whip).

Not much was known about Spice except that she was a love interest and henchwoman for Two Face's bad side while Sugar was on Two-Face's good side. When The Riddler tracked them down at Two-Face's Hideout, he showed The Box to Two-Face and demonstrated its capabilities on Sugar and Spice, with Riddler and Two-Face stealing part of Spice's IQ and promised that he would help them solve "The greatest Riddle of all, the mother of all Riddles: who is Batman?" in return for helping him steal production capital and place boxes all over Gotham City.

They formed an alliance and hid out at Riddler's hideout at his factory that was called NygmaTech where Riddler developed a strong mind device to drain knowledge from the citizens of Gotham. While the Riddler (under the identity of Edward Nygma) and Sugar were at the Ritz Gotham showing Gotham's elite his new improved box, Two-Face, Spice, and Two-Face's Thugs broke in and started to rob the guests, and were stopped by Batman. After she found out from the Riddler and Two-Face that Bruce Wayne was Batman, Spice became part of a trap for the Dark Knight. The Riddler invited Batman to Claw Island after he captured Dr. Chase Meridian and then Robin. Riddler told Batman him that he knew who he was and if they could truly co-exist. Sugar suddenly appeared, pulled down a curtain on a glass cylinder, and revealed Chase. Spice appeared, pulled down the curtain of the other one, and revealed Robin.

The Riddler gave Batman a choice to rescue Chase or Robin, but Batman distracted him by giving him a riddle of his own long enough for him to destroy the mind device, which warped the Riddler's mind in the process. As Riddler's Lair exploded around them, Spice and Sugar escaped. What happened to them after that was unknown, but the novelization said that they disappeared from Gotham forever to avoid capture, while Two-Face was killed, and the Riddler was taken to Arkham Asylum and was declared insane. 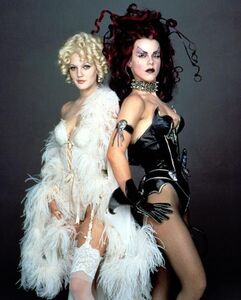 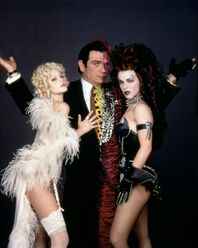 Retrieved from "https://villains.fandom.com/wiki/Spice_(Batman)?oldid=3487903"
Community content is available under CC-BY-SA unless otherwise noted.