NOTE: This page is only about the symbiote part of Spider-Carnage. For the Spider-Man clone, see here.

Possess Peter Parker into destroying all realities beyond space and time (failed).

Spider-Carnage is the overarching antagonist of Spider-Man: The Animated Series, serving as the main antagonist in Season 5.

It is the alias given to a Carnage symbiote that possesses who was believed to be an evil clone to Peter Parker (a.k.a. Ben Reilly/Scarlet Spider).

It was voiced by Christopher Daniel Barnes, who also voiced Electro in the 2012 Ultimate Spider-Man series and Vulture in the Spider-Man Unlimited mobile game.

Spider-Carnage was born when a Carnage symbiote was accidentally transported to an alternate reality by a device created by Kingpin in the universe. It was summoned when Ben Reilly, a.k.a. Scarlet Spider, was trying to stop Kinpin in his plans but was interrupted by his clone, Peter Parker. The Parker clone had held a grudge against Reilly due to the revelation that he had been a clone of him created by Dr. Miles Warren.

Once the symbiote arrived, it bonded with the Parker clone due to his grudge and hatred for humanity, driving the man insane and thus Spider-Carnage was born. Upon his birth, Spider-Carnage had teamed up with Kingpin, as well as Alistor Smythe, the Hobgoblin and Green Goblin-ordering the two goblins to massacre all of New York City. He puts his partners under the delusion that he wants them to steal some equipment from J. Jonah Jameson to build a machine he can use to control people’s minds with, when he’s actually intending to use it to destroy all of the multiverse.

The Goblins’ plans in stealing the equipment are somewhat interrupted by Spider-Man from the Prime Universe, who was brought there by the Beyonder, thus he tries to kill him. However prime Spider-Man is teleported to Madame Web’s lair by the Beyonder before Spider-Carnage can do anymore damage.

Madame Web had foreseen Spider-Carnage’s plans as well as the results should this plan become successful, therefore she recruited Peter Parker from the Prime Universe, as well as four other Spidermen in aiding Scarlet Spider to stop him.

Spider-Carnage kidnaps Gwen Stacy, threatening to kill her should anyone follow him to where he intends to finish the machine to go through with his plans in destroying all of reality. Prime Spider-Man comes up with the idea of bringing Armored Spider-Man’s uncle Ben to the rooftop where Gwen is being kept. Once there, Ben is able to reach out to the Peter Parker being controlled by the evil symbiote. Parker repents and tries to break free of the symbiote, but the alien won’t go down without a fight, causing Peter severe pain in the process. Parker is forced to use the device to open an unbalanced portal, so he may jump into and sacrifice himself, along with the Carnage symbiote. The plan is a success and the portal is vaporized, killing both of them. 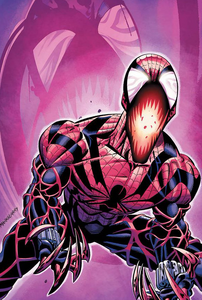 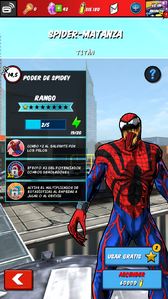 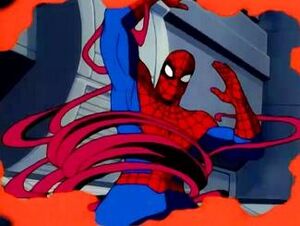 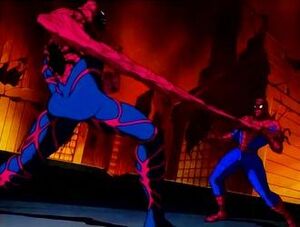 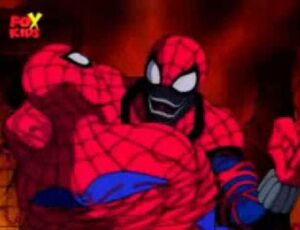 Spider-Carnage grabs hold of Spider-Man during their fight 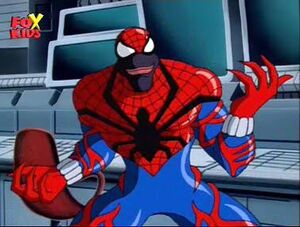 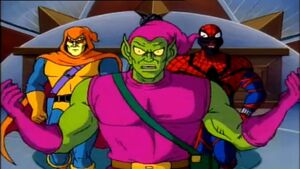 Spider-Carnage with Green Goblin and Hobgoblin 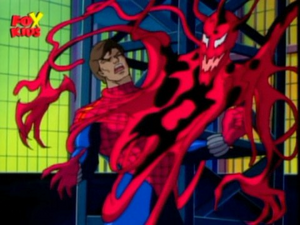 The symbiote refuses to break away from Peter Parker 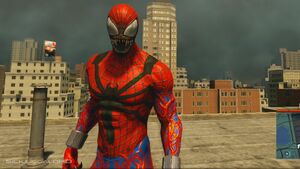 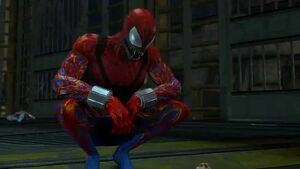 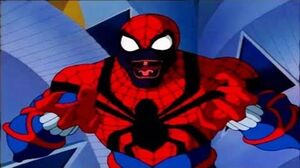 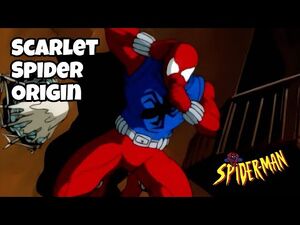