NOTE: This page is only about the Spider-Man clone. For the symbiote part of Spider-Carnage, see here.

Spider-Carnage
My Other (by Scarlett Spider)

Destroy all realities beyond space and time for revenge (later abandoned)

Peter Parker, also known as Spider-Man or Spider-Carnage, is the main antagonist (alongside the symbiote possessing him) of the two part series finale to the 90s Amazing Spider-Man: The Animated Series. He is the clone of his universe's Peter Parker, who takes up the alias of Ben Reiley and later the Scarlet Spider. He was an already unstable man due to his realization that he was a clone, but became more unhinged upon bonding with the Carnage symbiote.

Like the symbiote itself, he was voiced by Christopher Daniel Barnes, who also played Peter Parker/Spider-Man and his alternate dimension counterparts, including Ben Reilly. Barnes would later voice the Spider-Man villain Electro in the 2012 Ultimate Spider-Man Series, as well as both Electro and Vulture in the Spider-Man Unlimited mobile game.

In a separate reality from the prime version, Peter Parker still acquired his power's from the bite of a radioactive spider. His life, however, was a lot tougher. His Uncle Ben died in an apparently similar manner to the prime universes, then a few years later Aunt May passed away. The loss of his parental figures and the apparent absence of any close friends, left Peter Parker alone, making his mind unbalanced.

At some point afterwards, Peter crossed paths with that of scientist Miles Warren. Having apparently discovered Spider-Mans true identity, Warren managed to somehow capture Parker. He then successfully cloned another Spider-Man, but both men escaped with Parker's memory, therefore unable to remember which one of them was the real clone. One of the two men eventually concluded that he was the clone and surrendered Peter Parker's name and identity to the other man. This first man moved away, changing his hair color and style, before taking up a new name Ben Reilly (in honor of Peter's Aunt and Uncle). Possessing the same skills as Spider-Man as well as the urge to protect people was still present in Reily, who eventually took up his own superhero identity and became the Scarlet Spider. Although Reilly wished to help Parker as a fellow hero, the original Spider-Man despised the Scarlet Spider's existence and grew to hate him even more.

Then both men received some very shocking news. Dr. Curt Connors, an ally of Spider-Man and Scarlet Spider and who was aware of their real identities, studied the pairs genetic makeup. From the results, Connors theorized that Ben Reilly was in-fact the real Peter Parker and that the other man was the clone. This made "Peter's" hatred for "Ben Reilly" absolute.

Deciding that there was not enough room in the world for two Peter Parker's, Spider-Man pursued Scarlet Spider when the latter attempted to stop Kingpin from developing a portal between dimensions. Reilly initially thought that Parker was there to help him. Once the Kingpin's guards and scientist were subdued, however, Spider-Man attacked the Scarlet Spider, intending to kill him. The two men briefly fought, allowing the Kingpin to escape.

Unnoticed by the two Spider-Men, the Kingpin's portal machine was active. Then suddenly, through the portal, a Carnage symbiote emerged. Drawn by Spider-Man's absolute hatred for his duplicate and the world in general, the evil symbiote bonded to Spider-Man, which finally drove him into insanity and evil.

Although he was now undoubtedly insane, Spider-Carnage managed to retain Peter Parker's intelligence. This, in conjunction with Carnage's evil and the Kingpin's technology, made for a frightening combination. As such, this new evil version of Spider-Man came up with a plan to take revenge on the whole of reality for his miserable existence.

After forming an alliance with The Kingpin, and with the help of his former adversaries the Hobgoblin and the Green Goblin, Spider-Carnage devastated New York City, apparently massacring large numbers of citizens. J. Jonah Jameson (who like his main universe counterpart had always hated Spider-Man) and Robbie Robertson were among the few survivors. Throughout the carnage, the villains started searching for parts, which Spider-Carnage told them would help them to supposedly build a mind-control device for Kingpin. In reality, it was a weapon meant to destroy the entire multiverse as revenge for his life of torment.

To combat this, the interdimensional traveler Madame Web summoned the Scarlet Spider along with various other Spider-Men from different realities to stop Spider-Carnage and his madness.

Despite several setbacks, Spider-Man, Scarlet Spider, and later a powerless version of Spider-Man, managed to infiltrate the Kingpin's headquarters and subdue the two goblins. They also revealed Spider-Carnage's intentions to the crime boss, which was immediately confirmed by their evil counterpart. This prompted Fisk to turn on Spider-Carnage, but he was quickly subdued.

Spider-Carnage then activated the machine, but before the countdown was complete, Spider-Man and Scarlet Spider managed to dismantle and stop the machine. Whilst his plans were apparently foiled, Spider-Carnage proved that he was not beaten. He simply grabbed the core of the device, which still functioned as a portal transporter, and used it to travel to another dimension, with the intention of finishing his plan there.

Spider-Carnage landed in the reality of the Armored Spider-Man. Due to the prosperity of this world's Peter Parker, Spider-Carnage had access to great technologies and weapons, which he utilized against his adversaries. Once again, he worked together with the Kingpin of that world and captured the prime Spider-Man when he arrived.

He pretended to be the Peter Parker of that world to escape suspicion, but when he was attacked by Spider-Man, Spider-Carnage was forced to reveal his real identity. In a desperate bid to complete his plan, Spider-Carnage kidnapped Armored Spider-Man's girlfriend Gwen Stacy. Threatening everybody present that he'd kill Gwen first if anyone followed, Spider-Carnage made his escape announcing that he was all set to carry out his plan and destroy all realities.

As Spider-Man pursued his insane counterpart, he came to a revelation about Spider-Carnage's character. The man beneath the symbiote was still a version of himself. He concluded that Spider-Carnage wasn't truly evil, simply lost and confused, hurt by the strains of his reality and influenced by the symbiote. Thinking back on his own experiences, Madam Web's teachings and the behavior of the Armored Spider-Man, Parker realized that there might still be a way to save his alter ego trapped inside Spider-Carnage. To do so though, he needed some assistance.

Spider-Man eventually tracked Spider-Carnage to a rooftop. Holding his hostage, Gwen Stacy, over the edge, Spider-Carnage gloated that he had recalibrated his device so that anything sucked into an ever-expanding portal would be completely destroyed. With only a few minutes left until the portal reached critical mass, Spider-Man tried to reason with his fallen counterpart, stating that the real Peter Parker underneath the symbiote could not possibly be this evil. Spider-Carnage dismissed this accusation stating flat out that his past self, the heroic Peter Parker, was dead.

That was when Spider-Man played his trump card, something that shocked Spider-Carnage to his very core. Knowing that he would not be able to reason with his fallen counterpart, Peter Parker brought along somebody that all versions of himself looked up to and whose words inspired him for many years to come. That person was Parker's Uncle Ben, who was still alive in this reality. Spider-Man had realized from the Armored Spider-Man's earlier recklessness that he had never learnt the lesson that with great power comes great responsibility. Thus, he realized that Uncle Ben must still be alive in this reality, whereupon he visited him and explained everything.

With Spider-Man watching carefully, Ben Parker approached Spider-Carnage unafraid. The sight of his deceased Uncle startled Spider-Carnage, who could not believe his eyes. He immediately released Gwen and recalled a fond memory from his youth with his own Uncle.

Uncle Ben proceeded to talk not to Spider-Carnage, but to the Peter Parker underneath the costume. He assured the alternate version of his nephew that despite knowing he'd had a rough life and done many bad things, he still loved him. These words had a profound effect on the fallen Parker, who took his mask off and began to break down. Ben then reminded him of his ultimate lesson concerning power and responsibility, reminding him about the real Peter Parker inside him, stating that the symbiote was evil.

At this point, Peter Parker finally broke free of the symbiote's control, abandoned his plan to destroy all of reality and was horrified by what he had done. He then tried to break free of the Carnage symbiote, and become Spider-Man once again. Unfortunately, Peter had been Spider-Carnage for too long and he and the symbiote were now permanently fused, as he felt all the pain he had inflicted on others. Despite the pleas from his Uncle to keep on fighting, Peter quickly realized that it was no use.

Recognizing what needed to be done, Peter sincerely apologized for all of his misdeeds. Re-absorbing the symbiote back into his body, he made a final plea for forgiveness, then in a bid to make amends, charged at the portal device. Grabbing it, the redeemed Spider-Carnage deactivated the giant portal, thus saving the city and the world. He then activated a smaller portal on the roof-top, before making a heroic sacrifice by jumping into the unbalanced portal, vaporizing himself, the symbiote and the portal device.

Spider-Man and Gwen Stacy were both horrified by this action, but Uncle Ben assured them that Peter Parker had died a redeemed hero, doing what he believed was best for everybody, including himself. 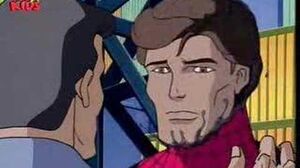