Devour Silver Surfer and Galactus to acquire their Power Cosmic.

Eat all life in Earth-2149.
Help to protect New Wakanda from the Zombie Galacti.
Stop Giant Man from traveling across the Multiverse (all succeeded).

Peter Benjamin Parker, better known as Spider-Man, is the main protagonist of the entire 2005-2009 Marvel Zombies comic book metaseries. He was one of many to be infected with the zombie virus and from there was transformed into a sadistic flesh-eater along with the other former heroes and villains. However, unlike most of his peers, who came to more or less accept their fate, Spider-Man was remorseful and self-loathing over the atrocities he'd been a part of, not the least of which was eating his own wife and aunt.

Earth 2149 Spider-Man first appeared taking away a raving Ashley Williams at Colonel America's request. However, once the Avengers were turned into the first zombies Spider-Man panicked and returned home to warn his aunt and wife. Unfortunately, he had already been bitten by Colonel America and succumbed to the virus, making his own family his first victims. Horrified at what he had done but unable to control himself he attempted to kill a visiting Nova and then turned Daredevil into a zombie when he intervened. From there Spider-Man along with most of his former friends became a sadistic predator who devoured any humans he could find, including J. Jonah Jameson (which he did admit to enjoying beforehand).

Eventually though, the zombies ran out of humans to eat, at which point they began making efforts to find a new food source. By this point Spider-Man had lost a leg during the zombie's battle with Magneto, rendering him much less useful in a fight. However, after he and his fellows devoured the Silver Surfer, they acquired his cosmic powers, at which point Spider-Man became a danger once more. When Spider-Man's group developed a means to take down Galactus (who had come to Earth to devour it), they also came into conflict with a group of zombified villains, many of whom were members of Spider-Man's own rogues gallery. During the battle, Spider-Man gleefully murdered his old enemies Venom and the Green Goblin, and also decapitated the Red Skull after he killed Colonel America.

After devouring Galactus and acquiring more of the Power Cosmic from him, Spider-Man and his fellows became the Galacti, and began devouring life across the galaxy. Through it all Spider-Man remained remorseful over his actions, noting how he and his friends had become worse monsters than any of their old enemies had ever been, but also being unable to resist the hunger.

After forty years the zombies seemed to run out of food to eat, at which point they decided to go back to Earth to recreate Reed Richards' portal for travelling to other realities. By this point Spider-Man had also gotten a mechanical leg to replace his missing one.

However, by the time the zombies returned to Earth their hunger began to at last dissipate, having finally burned itself out. Spider-Man and Luke Cage were the first to be freed of it's influence, and turned on their fellows, fighting them alongside the humans before the others overcame their hunger as well. Unfortunately, they were then betrayed by Cortez, who sent them to a different reality. Spider-Man for his part ended up in a world akin to the Marvel Universe in its "early years" (Silver Age), known as Earth-Z.

Upon arriving in this dimension, Spider-Man noticed the Sinister Six attacking Mary Jane Watson and several of his other friends, prompting him to intervene. However, he soon succumbed to his hunger and infected all of them save for Sandman. Upon returning to the scene a while later, he saw that the zombified six had consumed all of the friends he swore to save. After killing all of them in a frenzied rage, he declared that he could never be a hero again and tore his skin off in a scene which parodies the title page of 1967's 'Amazing Spider-Man #50'.

For the next few years, Spider-Man went into hiding, having developed a serum to subside his hunger, and was attempting to create a weapon that could permanently cleanse the multiverse of zombies. After helping Earth-Z's Wolverine and Kitty Pryde kill the zombified Wolverine from his original dimension, Spider-Man received a sample of Logan's healing factor.

Several decades later, Earth-Z's 'Avengers' team had consumed all life on the planet and were attempting to travel through the multiverse with the help of Earth-2149's Giant Man. However, they were confronted in the ruins of the Savage Land by Spider-Man and his team of 'New Avengers', which consisted of himself as well as Earth-Z's Hulk, Wolverine and Iron Man. After a brief battle, Spider-Man commanded Wolverine to open a canister containing Sandman, who Spider-Man had turned into a bioweapon after fusing him with Wolverine's healing factor and nanobots developed by Tony Stark which destroyed necrotic flesh. Sandman killed all of the zombies present, including Spider-Man, who thanked Flint for avenging Mary-Jane and Aunt May as he died. 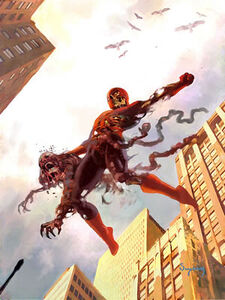 Spidey in a zombified homage to Amazing Fantasy #15.