Chilling with his fellow members, including Smokie.

Harassing his Cousin Thao and threatening his family.

Get his Cousin Thao to join his gang.

Continue his activities with his gang.
Continue to terrorize the Vang Lor family (all failed).

Fong, or better known as Spider, is the main antagonist of the 2008 film Gran Torino. He at first appears to be be your typical gang member before becoming more depraved as the movie goes on.

He was portrayed by Doua Moua.

Spider is a gang member and cousin of the Hmong Vang Lor family who live next door to Walt Kowalski. Not much is known about his background other than the fact he is a relative, but however his occupation of being in a gang causes an unfriendly relationship between both him and his cousin, Sue, who always likes to mocked the intelligence of both Spider and his fellow gang members.

As a way of getting the son in the family, Thao, to join his gang, Spider get him to steal Walt's Ford Gran Torino. When he fails, him and his recruits both attack him and attempts to take him away from his family, but Walt confronts them with an M1 Garand rifle and chases them off, earning the respect of the Hmong community.

Spider and his gang continue to pressure Thao, assaulting him on his way home from work by burning a cigarette against his cheek. After Walt sees Thao's injuries, he visits the gang's house, where he attacks and beats Spider's boss, Smokie, as a warning. In retaliation, the gang performs a drive-by shooting on the Vang Lor home, injuring Thao even though Walt attempts to defend the family with an M1911 pistol, and kidnapping and raping Sue. There are no witnesses and the members of the community, including the victims, refuse to talk about the crimes; preventing the police from doing anything about Spider's gang.

The next night, Walt goes to the house of Spider and the other gang members, where they draw their weapons on him. He speaks loudly, berating them and enumerating their crimes and thus drawing the attention of the neighbours. Putting a cigarette in his mouth, he asks for a light; he then puts his hand in his jacket and provocatively pulls it out as if he were holding a gun, inciting the gang members to shoot and kill him. As he falls to the ground, his hand opens to reveal the Zippo lighter with a First Cavalry insignia he has used throughout the film: he was unarmed. Sue, following Walt's directions earlier, frees Thao, and they drive to the scene in Walt's Gran Torino. A Hmong police officer tells them the gang members, including Spider, have been arrested for murder and the surrounding neighbours have all come forward as witnesses, so they'll be in jail for a long time, if not for the rest of their lives, definitely bringing an end to Spider's days of crime.

Spider is a typical sociopathic thug. He tries to have his Cousin Thao join for his gang to grow, not for protecting him, given the assault that both he and his recruits would do to him later on. He has shown he has no care for his family whatsoever as he purposely beats and has Sue raped. He also harasses and even assaults Thao throughout the film on top of using him.

Spider is also very disrespectful towards Walt, but is much more hesitant to attack him directly due to his willingness to fight back. Even though he shot Walt because he thought he had a gun, he still showed no remorse, and therefore, will live the rest of his life as a sociopathic thug who doesn't even care about his family. 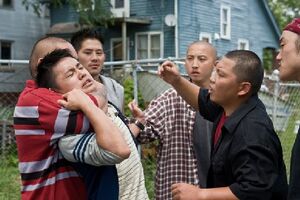 Spider and his gang torture Thao. 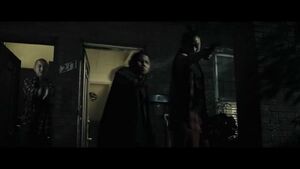 Fong and Smokey, causing their own downfall. 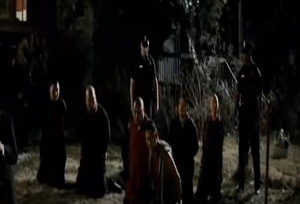