Spider Bytez is a minor antagonist in the 2012 television series Teenage Mutant Ninja Turtles, appearing in both Seasons 1 and 2, and as a cameo antagonist in Season 3. He took a video of the Turtles and tried to make money off of it online. He was later mutated into a giant spider during a battle between The Kraang and the Turtles, causing him to seek vengeance.

He was voiced Lewis Black, who also voices Mr. E in Scooby Doo: Mystery Incorporated and Linnux in Rock Dog.

In his human form, he appeared to be a fat balding old man who didn't take care of himself. He wore a tank-top, jeans, and sandals. He had a single hair at the top of his head. After being mutated, he had a large black body with tiny arms and hands. He had a giant mouth and three red/black eyes on on both of the top sides of his mouth, and a pair of eyes on either side of the bottom. The inside of his mouth is blue, and filled with large yellow teeth. At the top of his body was four giant spider legs with bright cyan at the ends. He also had red, black, and orange markings on his body.

Victor is a selfish and lazy person. He was willing to exploit the Turtles for his own benefit, without any regard on how it would affect them. He is greedy and delusional, thinking he would be able to make millions of dollars off of the short video.

Victor is quick to insult, having his first words be insults directed toward the Turtles. Despite obviously being outmatched in his human state, he would continue to talk in a poor manner about them in an ill light. This might have been because he thought that they were in costume, threatening to call the police after he learned of their martial arts capabilities.

Victor is a very ignorant person. Referring to the Turtles as "Kung Fu Frogs". Even after being corrected, he still continued to refer to them as such just so he could get the better of them.

We are first introduced to Spider Bytez in Turtle Temper. At this time, he is known as Victor. He finds them on his roof after his satellite dish wasn't working. He accuses them of playing dress-up, and then gets angry when he discovers that his dish is broken. He begins insulting Raffael, their argument drawing the attention of nearby Kraang. This causes a fight to ensue, which Victor video tapes on his phone. He brags about getting it on video and then escapes.

They later meet up with him again, asking if they could have the video. Victor demands one million dollars for it, which they obviously did not have. Shouting then ensues between them again which again attracts The Kraang. During the battle, The Kraang kidnap Victor and bring him to their lair. Victor tried to negotiate them into buying the video, but they ignored him. While they weren't looking, the Turtles had arrived and begun to rescue him with a chain. He shouted about not wanting to leave his phone, causing The Kraang to notice and shoot. During the battle, Victor went to grab his phone, which had a spider on top of it. Just as he did, a mutagen vat above him broke and it covered him in it.

He let out a scream which one of The Kraang went to check on. Their body was thrown backward and they ran away in fear. Victor, now Spider Bytez, appeared and told the Turtles he blamed them for his hideous state. Raphael had been sent home for his anger, and so they were outmatched. Victor used his new powers to fight back against them, his acid spit causing them to fall down a level. Raphael then revealed himself and joined them. Spider Bytez sent the other three down another level and taunted before he went down to finish them off. Raph followed him, only to be badgered with more insults. He used what he had learned about patience to overcome this, and was able to get the best of him. They eventually defeated him, smashing his phone in the process. He told them that they would regret this, and then escaped, bouncing off buildings into the distance.

In Metalhead Rewired, Spider Bytez sets off an alarm near the Turtle's lair. They go to check on the commotion, and find him running from Kraang. He asks for help, but they keep shooting so he just pushes past them. The Kraang eventually capture him, load him into the back of a car, and drive off.

He is later seen being let into a futuristic containment cell. As he tries to negotiate, they place a device on his head which causes him to fall under their control. Later, when the Turtles confront the Kraang, they release him and Snakeweed to fight them. Eventually, Metalhead figures out how to take control of the devices and releases them from their control. Spider Bytez helps fight off a few Kraang, and then escapes through a portal with the other mutants.

In the episode Meet Mondo Gecko, he makes a cameo appearance as one of the many mutants seen in the audience. 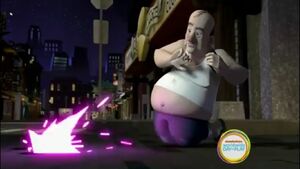 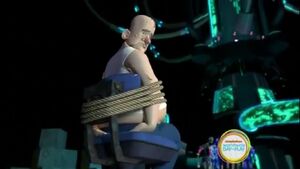 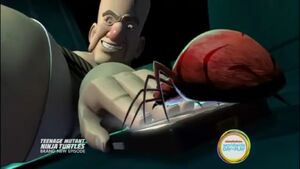 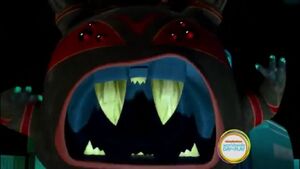 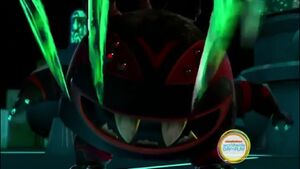 Giving off a menacing look. 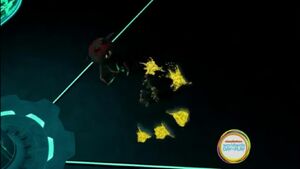 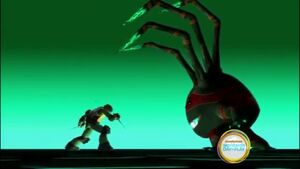 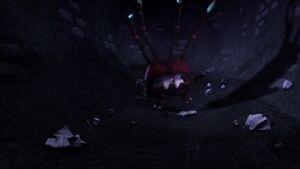 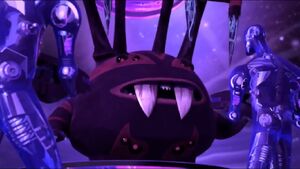 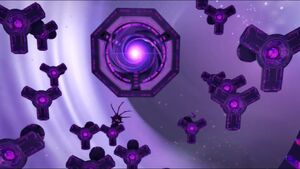