The Spider Demon was a one-shot villainess from Season 6 of Charmed. She appeared in the episode, "Spin City."

She was portrayed by Jodi Lyn O'Keefe, who (among other villainous roles) is perhaps best known for playing Gretchen Morgan on Prison Break.

According to lore, the Spider Demon emerges every 100 years to feed on the most powerful beings. She appeared at a hospital and went after Paige and Piper, while managing to bite Chris, which put him under her control. The Spider Demon returned to her lair, where she boasted to Rathmere, a powerful wizard she had been feeding on, that she found a powerful Whitelighter (Chris) while out on her hunt.

She later invaded the Halliwell household and trapped Piper in cocoon, while the mesmerized Chris actually subdued Paige and Phoebe. The Spider Demon escapes by morphing into an actual spider, dodging Paige's vanquishing potion.

After Chris trapped Phoebe and Paige in separat cocoons later on, he returned to the Spider Demon, who began feeding on Piper, as well as Baby Chris in her womb, which weakened Chris. Her dining is interrupted by the remaning Halliwells, who bring her out of her lair.

She is distracted by a fairy floating over her face, but the wood nymph's attempt to vanquish her with the potion fails when the Demon again morphs into a spider. This turns out to be her undoing, as she is squashed to death by an ogre. 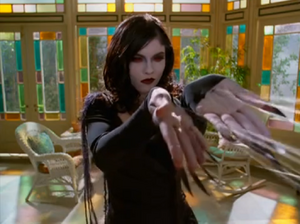