The Spider Grimm (unofficial) is an spider-like Creature of Grimm. Only one of these Grimm has appeared so far, in the non-canon RWBY: Official Manga Anthology, Vol. 3: From Shadows, in the chapter "Curiosity Killed the Cat".

The Spider Grimm appears as a small, black, spider-like monster with eight legs and Grimm markings on its back.

Like other Grimm, the Spider Grimm was created by the God of Darkness in an attempt to rid the world of life, and remained even after he and the God of Light abandoned Remnant. Salem later took control of the Grimm after her corruption.

In Vol. 3: From Shadows, in the chapter "Curiosity Killed the Cat", Beacon students report that a mirror stored on the first floor is cursed, with students reporting that if one looks into the mirror at night, they will be dragged inside by a demon and killed. Blake Belladonna goes one night to disprove the legend, and is suddenly dragged into the mirror by a distorted reflection of herself. The reflection taunts and attacks her, but Zwei attacks back. The reflection vanishes, and is revealed to be a hallucination caused by the Spider Grimm. Blake kills the Grimm, ending the "curse".

The Spider Grimm has the ability to produce webbing, but its most unique ability is the ability to create vivid and nightmarish hallucinations for its target, usually involving dark reflections of their own thoughts and fears. 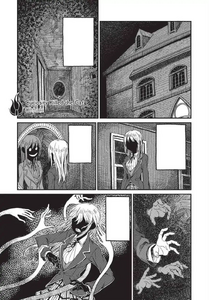