The PlayStation and Saturn versions of Doom in turn feature two Spiderdemons as the bosses of its final level, Redemption Denied. Like Cyberdemons, Spider Masterminds are immune to all blast damage, taking only damage from direct hits.

The Spider Mastermind appears as a large brain with many other physical attributes. It has red eyes and a big mouth with fangs. Four large, mechanical legs are connected to a base on the body. Two small arms are also connected to the base.

A chain gun is located directly in the base's center. When the Spider Mastermind dies, it's brain explodes into chunks of flesh and it's mechanical legs tip over. A Spiderdemon emits a demonic roar mixed with loud, whirring machinery which starts low-pitched but progressively "grows" in a crescendo to a high-pitched tone once activated.

The huge chain gun on the Spider Mastermind's chassis fires three bullets with every shot, much like the Shotgun Guy's shotgun, but at a rapid rate of 467 shots per minute. When a Spider Mastermind begins firing, it will not stop until its target moves out of view or is dead, or the monster itself is stunned or killed. Similar behavior can be observed in Arachnotron.

When killed, the Spiderdemon's mechanical body shuts down and collapses. A soft, whirring-down sound (similar to a mechanical rotor cooling down and stopping spinning) is heard as the body falls sideways to the ground, engulfed in flames.

Its brain is splattered on impact, the monster then emits a feral grunt that is readily cut out by an explosion, and all that remains are its shattered robotic legs and dismembered facial features in a huge pool of blood. In Doom (2016) Spider Mastermind's design is similar to its classin incarnation, with the added refinement and stylizing in design.

Spider Mastermind is once again the final boss in Doom and is the demonic host of Olivia Pierce when hell makes her the key holder to be merged with this unholy monster.

The Spider Mastermind, like its classic incarnation, has a large health pool and has a number of attacks which can cause serious damage, such attacks include jumping and sweeping with its robotic legs, firing bolts resembling the plasma rifle from an under-slung gun, and firing a sweeping laser from the body as well as other lasers at the sides.

It can saturate the area with spiked bombs, as well as call upon pillars that rise up from the surrounding area. Occasionally it will electrify the floor. Sometimes it will cause spikes to rise from the pillars which can cause damage. The Spider Mastermind's face is the weak point, as the exposed brain and machinery do not take much damage.

When most of its health pool is drained, the Spider Mastermind will crawl on its remaining legs to support itself and will turn upside down on itself to shoot lasers. 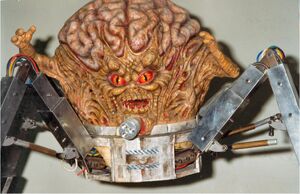 The model used for the digitization of the Spider Mastermind. 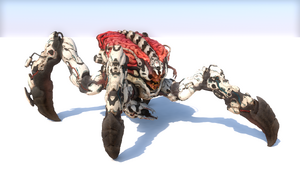 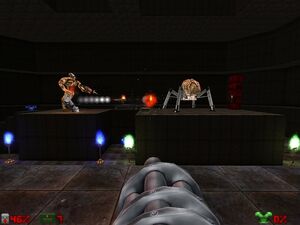 The Spider Mastermind and a Cyberdemon fighting. 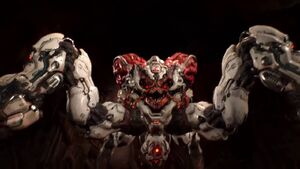