Kill off all competing species to ensure they become the dominant species on Earth (failed).

The Spiders are a fictional species of arachnid that acted as the supporting antagonists of the 1990 horror film Arachnophobia.

Although based loosely on real-life species were fictionalized in both the potency of their venom and their intelligence: to the point they were described as soldiers that worked collectively to eliminate any threats, with a General Spider and Queen Spider making up the very top-tier of the spider hierarchy.

The Jennings' house is suddenly infested by an army of lethal spiders at the climax of the film. The spiders are the offspring of a common house-spider and a lethal South American spider nicknamed 'the General' due to its method of sending out drone units to exterminate all life in the immediate surroundings of the place it claims as its breeding nest (much like a general dispatches troops to pacify an area). With the area cleansed of all other life, the General will mate again with its 'Queen', a much larger spider produced during the first generation of half-breeds formed from the spider it had originally bred with, to produce a new generation of Generals.

While Mrs. Jennings and the kids escape outside and the local bug exterminator keeps the drones at bay, Ross is trapped inside and is attacked from the balcony overlooking the living room. In the struggle, he falls from the balcony and crashes through the floorboards (they had been in need of replacement due to termite problems). Ross finds that the drones have not followed him into the basement, and in fact seem to be avoiding the place. Remembering what he was told earlier about spiders, that a nest would be kept in a dark, dank place and offspring would be driven away immediately to prevent them from eating each other, Ross is soon searching for the egg sac the Queen has prepared. The Queen attempts a surprise attack on him but is knocked into the circuit breaker for her efforts and fried.

Ross then makes his way to the egg sac, and throws some wine on it so he can set it ablaze with a candle-lighter and cookie spray, only to be ambushed by the General himself, who has been lying in wait, causing him to fall from the wine racks he climbed up. The General, who is used to being on the top of the food chain where he's from is more then ready to take Ross in a fight to make sure his future offspring are born.

Ross then sets his wine racks ablaze, attempting to flush out the spider. The General, however, showing some truly incredible intelligence for a spider, cleverly fakes him out and taunts Ross by staying just out of range of the fire, before ducking into an air pipe. Ross listens carefully to the sound of the spider crawling around in the pipes, and follows the sounds to an opening, where he proceeds to set another blast of flame in.

The General was ready for him, this time, though. As soon as Ross ceases fire, the General charges out and jumps on Ross's neck, terrifying him so that he crashes into a wine rack, and lands flat on his back, covered with some debris.

The General, who seems almost amused at this point, slowly approaches Ross's leg as he lays helplessly on the ground, and Ross finds himself re-enacting the very incident that scarred him as a child and made him so terrified of spiders to begin with. But this time, Ross notices that there is a small wooden plank on his leg, erected sideways like a seesaw. Ross waits till the General crawls onto it and immediately sits up, slamming his elbow onto the upraised end and sending the General flying into one of the fires Ross had made earlier in his fight.

Before Ross can get a chance to take a breath of relief, he notices the egg sac has begun to pulse as new spiders are being born. As he prepares to finish them off, the General suddenly dashes out of the flames, covered in fire. The spider makes one last attempt on Ross as it jumps toward him just as Ross grabs his nail gun and fires it, impaling the General and sending the flaming spider flying into the egg sac, destroying both threats. 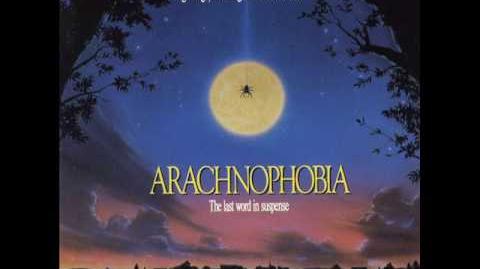