Villains Wiki
Register
Don't have an account?
Sign In
Advertisement
in: Villains of Folklore, Mythology Villains, Animals,
and 20 more
English

Spiders are eight-legged arachnid arthropods of the order Araneae. Throughout folklore, myths, and fiction, spiders have been portrayed as mysterious monsters. While in some folklore and myth they are seen as benevolent creatures, many recent fictions and folklores have portrayed them as malevolent monstrosities. Spiders are considered to be especially frightening and unsettling things by those who suffer from arachnophobia.

In real life, spiders are eight-legged predatory arthropods that live mostly solitary lives, using their webs to catch food, which is normally bugs and other small animals and usually do not attack humans (Unless cornered or they accidently or deliberately antagonize them). Females are much larger than males and are the ones that spin the webs, hence why most characters/monsters based on spiders regardless of their morality are predominantly depicted as female. After mating, most female spiders would usually eat their mates and feed their liquified remains to their young when they hatch, though there are a couple exceptions, usually when the male is lucky enough to escape.

While in mythologies of other cultures such as Sumerian, ancient Grecian, ancient Roman, Aboriginal Australian, and many Native American, spiders are depicted as either harmless or outright benevolent creatures, other ancient beliefs portrayed them as tricksters and villains.

In a Native American Lakota myth, a spider-like trickster named Unktomi was known to lure travelers and heroes out of their clothes.

In ancient Japanese folklore, the legendary Minamoto no Raiko encountered the shapeshifting spider Tsuchigumo, who takes the guise of a young boy to lead the hero into his web, disguised as a house.

In West African mythology, Anansi was a trickster deity of creation personified as a spider.

A spider was famously used as the titular main antagonist of the 1829 poem "The Spider and the Fly" by the late Mary Howitt:

"Will you walk into my parlour?" said the Spider to the Fly,
'Tis the prettiest little parlour that ever you did spy;
The way into my parlour is up a winding stair,
And I've a many curious things to shew when you are there."

"Oh no, no," said the little Fly, "to ask me is in vain,
For who goes up your winding stair
-can ne'er come down again."


Spiders likely gained reputations as symbols of evil from the 1842 Biedermeier novella The Black Spider by the late Jeremias Gotthelf, where the spider symbolizes evil works and represents the moral consequences of making a pact with the Devil.

Additionally, a spider was famously portrayed as the main antagonist of the children's nursery rhyme "Little Miss Muffet", in which the titular character is frightened by a large spider that causes her to flee.

Spiders' receptions as frightening and predatory creatures have led to them becoming popular antagonists in horror and fantasy, as well as common symbols and icons of Halloween.

Additionally, giant, man-eating spiders are common foes in fantasy, horror, and science fiction, such as with Shelob from The Lord of the Rings franchise, Aragog from the Harry Potter franchise, Kumonga from the Godzilla franchise, and the true form of Pennywise/IT from Stephen King's IT.

Featured in the fiction of Clark Ashton Smith, the spider-god Atlach-Nacha, or The Spinner in Darkness, is part of the Cthulhu Mythos. An enormous spider with a face resembling a human's, Atlach-Nacha spends eons spinning a web across an vast underground chasm. Legend has is that when the web is complete, the world will end.

Additionally, villains in fiction commonly associate with spiders or have spider-like abilities, such as Venom from Marvel Comics, Arachne Gorgon from Soul Eater, and many more.

In cryptozoology, there exist rumors of a Congolese giant spider known as the J'ba Fofi, with reports coming in as early as the 1890s. 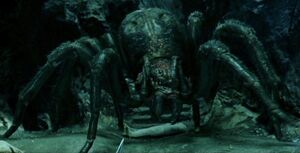 Shelob from The Lord of the Rings. 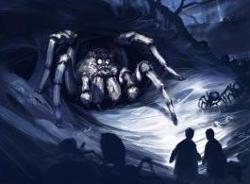 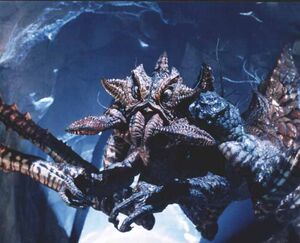 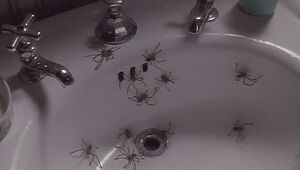 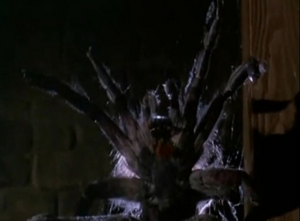 A Spider in the video game Minecraft. 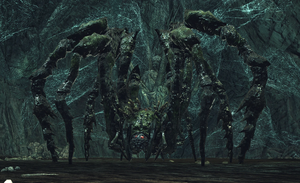 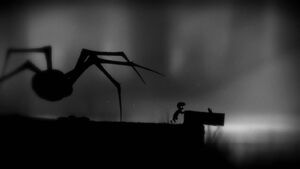 The Spider from Limbo,