His hammer that shoots out energy blasts

Crushing all of his enemies.

To eliminate Spyro and his friends (failed).

Spike is one of the Sorceress's minions and a villain in Spyro: Year of the Dragon.

He is a Rhynoc minion of the Sorceress who was transformed into a muscular horned creature with a metal hammer which is also a laser gun-like weapon, in order to fight Spyro.

At her castle in the Midnight Mountain kingdom within the Forgotten Worlds, after the Sorceress was through with her novice apprentice Bianca's failure at stopping Spyro, she then used her magic to turn Spike, her mere Rhynoc subject into a muscle-bound monster to eliminate the dragon.

The fight with Spike takes place in a creepy arena in a lake of green lava outside the Midday Gardens. To attack Spike at the start, charge into the giant magma balls that exhume themselves from the lava, making sure to aim them at Spike, be careful, though, the interval between Spike's initial and next volley of shots is rather short, giving Spyro only a small window of opportunity to deal damage against him, furthermore, he will occasionally destroy the magma balls. After the first section of the battle, Spike with a stomp on the ground, destroying the magma balls permanently and cracking the arena. Fire will erupt unexpectedly from the cracks and only Spyro can get injured from it, exacerbating the remainder of the battle.

After a while, Byrd will start to drop red crystals - Walk over to eat them, and Spyro can use a powered-up flame. Spike is able to grab red orbs with his blaster, if he does, he will shoot out a flaming wall towards you, but this is easy to avoid, just carefully jump over it.

After more damage, Sgt. Byrd will then drop blue crystals - After taking these, Spyro will shoot them out from his mouth which swirls around in the direction it is launched. Spike can gain this ammunition as well, and can create a double helix shot that will follow you, the best way to avoid this is by charging away from it. After the battle, Spike was fallen and defeated. 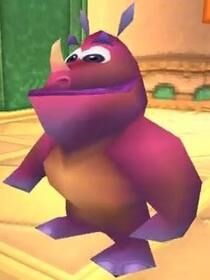 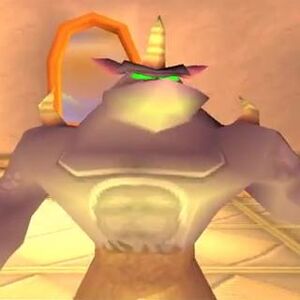 Spike in the original games. 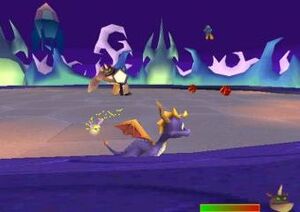 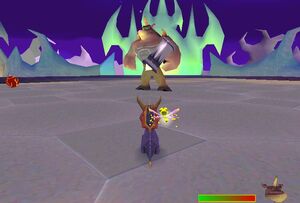 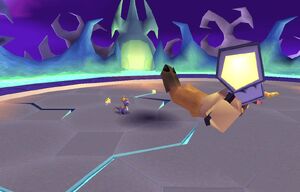 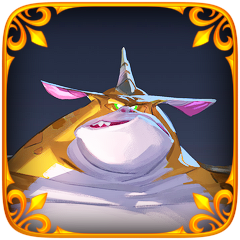 Retrieved from "https://villains.fandom.com/wiki/Spike_(Spyro)?oldid=4198486"
Community content is available under CC-BY-SA unless otherwise noted.