Spike the Bulldog is the deuteragonist of the animated series Tom and Jerry. Though he is usually a protector of sorts towards Jerry Mouse, his son Tyke and sometimes Tom, such as in "The Truce Hurts", sometimes going as far as being an enforcer of sorts to the mischievous rodent.

However, there is no denying that Spike is often cruel towards Tom (a stereotype of dog/cat rivalry) and although he often gives Tom several chances to avoid his wrath, he will attack the cat viciously once those chances have been spent.

Tom often tries to get revenge on Spike, so it can be argued that Spike can play both the good guy and the bad guy depending on the cartoon, let Tom and Jerry themselves who can have their share of anti-heroic or villainous tendencies on occasions in hence their two-sided rivalry. In general though, he is a bully in regards to Tom and threatens to harm the cat physically, to the point of making Tom fear for his life on numerous occasions. Although he is considered as supposedly one of the series' "protagonists", he is usually portrayed as an unfair, mean-spirited, rude, violent, selfish, reckless, egotistical and hypocritical character.

Spike can also be friendly when he wants to be and is seen to be a caring father, showing that, although a fierce opponent, he isn't entirely without merit, even if his caring moments toward anyone other than his son are extremely rare. Ironically, despite their close friendship nowadays, in early appearances Spike was an enemy of both Tom and Jerry, with the cat and mouse occasionally teaming up to rid themselves of the aggressive beast, as even shown in other episodes as well: This element of Spike seems to have faded over time as he is now considered primarily as the show's most malicious antagonist, as he is shown to antagonize both Tom and even Jerry whether if it's justified or not. In the Tom and Jerry Show in the 1980s, Spike was sometimes the rival to a basset hound called Droopy, another MGM creation.

In Tom and Jerry Kids, his personality is softer, but his animosity with Tom as a kid (or Tom's Child) still existed as he threatens Tom.

In Tom and Jerry Tales he was voiced by Michael Donovan who also voices Sabretooth in X-Men: Evolution, Grey Hulk in The Incredible Hulk, Guile and Zangief in Street Fighter TV. 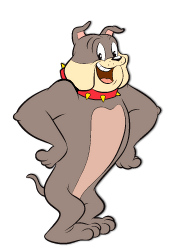 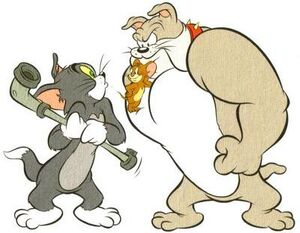 Tom is frightened of Spike who got Jerry's back.

Retrieved from "https://villains.fandom.com/wiki/Spike_the_Bulldog?oldid=4031560"
Community content is available under CC-BY-SA unless otherwise noted.