Destroying and Smashing other creatures or worlds

Kidnap Squeak and Hot Air Jr. family to carry their trap and kill him.

The enormous ball then floats up and off the screen displayed in the introduction. The player has to defeat it with Hot Air Jr in level 12, the last "story" level.

In its first phase, the boss looks like a large circular rock with eight large spikes sticking out of it, and an angry expression on its face. The player has to push a button, and a floating mine will be spawned. When the boss shoot its spikes, the player has to avoid them and direct the mine with the fan to one of the thrown spikes. The giant spike ball will be hurt and will lose the damaged spike and the opposite one. The boss will change to the second phase once this is done.

In the second and third phases, it has six and four spikes on it, respectively. In the third phase, when it shoots its shell, the real boss without the shell is shown. The player has to do the same what they did before: First, avoid the (now two) spikes, and then, use a mine to destroy them. The giant spike ball will be hurt again when this is done, and will change to the third phase.

In the fourth phase, the boss is a small ball with little spikes, is completely vulnerable and cannot hurt the balloon with contact. The boss is holding a white flag, meaning that it does not want to continue the battle and surrenders. It gives a key to Hot Air Jr, and at this point the player has two options. Depending of which option the player selects, a different ending will appear. The first option consists of getting the key, open the gate and rescue Squeak the Dog. If the player does that, the good ending will appear.

The second possible ending is called "evil ending". To obtain this, the player has to push a button to get another floating mine and direct the mine to the boss. The boss is destroyed but Squeak will not be rescued and the eveil ending will be displayed. 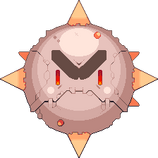 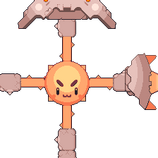 Spike Ball true form.
Add a photo to this gallery

Retrieved from "https://villains.fandom.com/wiki/Spiked_Crusher?oldid=3781133"
Community content is available under CC-BY-SA unless otherwise noted.