Mid-Ranking Officer
Spinister is a minor antagonist in the Transformers franchise, especially Generation One. He was originally a figure in the 1988 toyline. He is the secondary antagonist of Marvel UK's "The Way of the Warrior" and "Cry Wolf" storylines.

The toyline portrayed him as a Double Targetmaster but this was not reflected in his fictional appearances, where his partners did not appear.

Spinister was introduced in Marvel UK's "Hunting Party", where he acted as the field leader for the new Decepticon Mayhem Squad assembled by Snarler. During a training session, he covered for Needlenose when he panicked, pretending to be in trouble so Needlenose would find the courage to rescue him. He and the other Mayhems were then taken to Earth by Snarler to hunt down the surviving members of their predecessors, Carnivac and Catilla, who had effectively deserted to the Autobots. They lured out Carnivac by attacking a human settlement and came close to killing him. They were forced to retreat when the Autobots arrived, but not before Bludgeon had killed Catilla.

Due to irreconcilable continuity with the main US run, Earthforce occurs in a slightly different timeline. That being said, it is possible some of the events did occur in a different way in the main timeline.

Marvel UK's Earthforce storyline provided a conclusion to the Mayhem story, as Spinister and the other Mayhems set up base on an island, knowing Carnivac would come after them for revenge. Spinister was disgusted when Needlenose panicked and organised an unauthorised drill, threatening to kill him if he showed cowardice again. The main Mayhem group eventually confronted Carnivac and, wanting the mission finished efficiently, Spinister shot him from a distance and apparently killed him. (In fact, he had merely destroyed his Pretender shell.) When the Autobots attacked, Bludgeon, Octopunch and Stranglehold, disappointed at the anti-climax, gleefully charged into battle. Spinister was happy to leave them to it and return to Cybertron, only to run into Carnivac who shot him dead.

The UK annual text story "Trigger-Happy", seemingly out of continuity with his other appearances, depicted Spinister working for Megatron as part of a convoy delivering battle plans. After a failed Autobot ambush, he was ordered to try and convince Backstreet to desert to the Decepticons but was unable to resist roughing him up first. 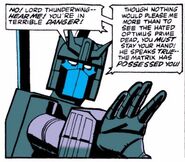