The Croods: A New Age

Leader of the Punch Monkeys

Ruling and torturing his Punch Monkeys.

Have the Punch Monkeys offer him bananas at every full moon
Eat Grug, Phil and Guy as bananas for a sacrifice.

Kill the Croods and Bettermans (both failed).

The Spiny Mandrilla is the main antagonist of DreamWorks' 39th full-length animated feature film The Croods: A New Age. He is the tyrannical, misanthropic and ravenous leader of the Punch Monkeys who eats his henchmen who fail to bring him bananas. He is the archenemy of the Croods and Bettermans.

The Spiny Mandrilla is a large primate who is the hybrid of a spiny echidna, a silverback gorilla and a mandrill.

The Spiny Mandrilla is a truly evil, monstrous and tyrannical apex predator that enslaves and tortures the Punch Monkeys and other creatures to do his bidding. He is the largest and most powerful creature in the Croodaceous period and is also the most dangerous apex predator in the world. The Spiny Mandrilla is highly ruthless, gluttonous and bloodthirsty as he eats other creatures (especially the Punch Monkeys) that fail to bring him back any bananas and takes enjoyment in killing anyone who stands in his way. He shows signs of cannibalism as he would also like to eat humans, cavepeople, apes and monkeys just to satisfy his appetite. The Spiny Mandrilla doesn't tolerant failure and would devour his subjects if they don't bring him any bananas, as he ate hands full of them for it. He is also extremely greedy, egotistical and selfish as he doesn't care about anyone or anything but himself.

The Spiny Mandrilla was first seen in a flashback where he took a bunch of bananas from a pile that was made by the Punch Monkeys as offerings to please him at every full moon. However, when the water dries up that destroys the colony's banana supply, the Spiny Mandrilla returns once again for his bananas but is very displeased that the Punch Monkeys failed to bring him any and then he grabs a whole bunch of his followers and presumably ate them for failure. Later on, he is seen grabbing Grug, Phil, and Guy that were in banana suits at that time, and tried to devour them. But is stopped by Croods and Bettermans when Gran uses her wig to force him to spit out the trio and rescue them. After that the Spiny Mandrilla chased after The Croods and The Bettermans, and then he chases after Eep. As the chase continues, he comes close to grabbing Eep, but she was saved by Guy. Then, as the chase ends, he was hit with a fossil that had it's vines set on fire by Eep and Guy. After that, he makes one final attempt to kill Eep, but she takes off her peanut toe, and the Spiny Mandrilla falls to his death. 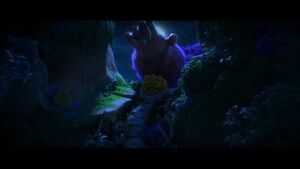 Spiny Mandrilla about to grab it's Bananas 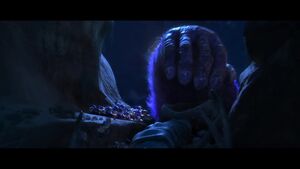 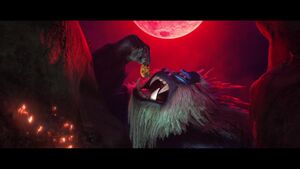 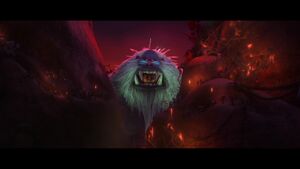 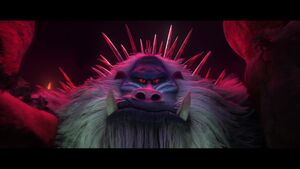 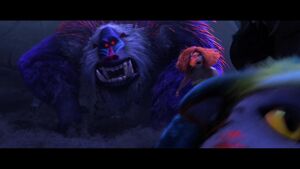 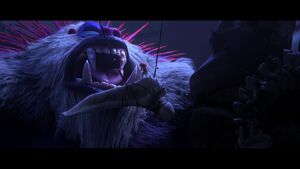 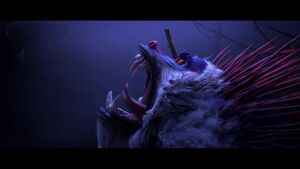 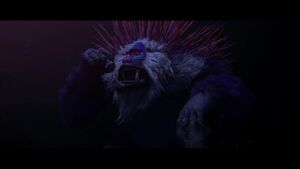