Helping Mojo in his plans.

To help Mojo rule the universe.

Minion
Spiral is a villain in the Marvel universe. She was originally Rita Wayword, a professional stuntwoman who befriended the mutant hero Longshot from the dimension of Mojoverse. How she became the supervillain Spiral is a paradox. She was attacked by her future evil self, which led to her meeting and falling in love with Longshot. When he returned to his home dimension, she went with him, and they were both captured by the dimension's evil ruler, Mojo. Longshot was mind-wiped of all memory of Rita, while she herself was transformed into a living weapon. Mojo and his scientists performed experiments on her, which made her grow six arms (some flesh, some robotic), her hair turn silver, and gave her the mental ability to teleport and time-travel. She was trained in the dark arts of magic and fighting. Then Spiral was sent back in time to attack her former self and set in motion those events.

Spiral serves under Mojo as his right-hand and guardian. She wields several swords and can conjure up more weapons and other objects through sorcery and teleportation. Currently, she serves as a member of the X-Force.

Spiral first appears in the episode titled Mojovisions. However when she is introduced for the first time, not much is known about her. All we know that she works for Mojo and is an accomplished sorceress and that she helped capture the X-Men for Mojo. So he could put them on his television show, which of course was done against their wills. Much later in the animated series Spiral makes a second and final appearance in the episode titled LongShot. Here she is near the beginning of the episode trying to Capture Longshot. Later she was revealed to have betrayed Mojo and had fallen for Longshot. However their relationship soured and she went back to working with Mojo. She was voiced by Cynthia Belliveau.

Spiral appears in Wolverine and the X-Men with the Reavers working for Mojo ordered to attack a ship named Avalon with mutant passengers heading to Genosha. They threatened all of its passengers, but Nightcrawler and his team of mutants defeated them in a battle that caused Spiral to lose four arms and the Reavers to teleport away from the ship. She later tried to avenge her loss by tricking Nightcrawler and the Scarlet Witch into taking part, as prey, in a hunting game organized for Mojo. She, along with Mojo, was defeated by Kurt and Wanda with the help of Wolverine, whom Spiral had summoned and reverted to his Weapon X persona for this game. 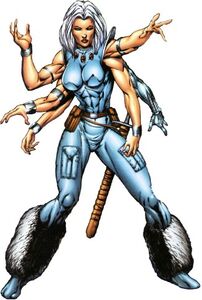 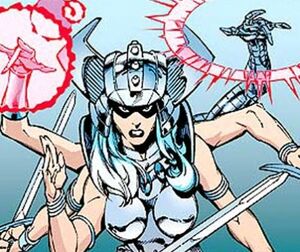