Get its revenge on Aura Guardian or his descendants (anime only; both failed).

Spiritomb (in Japanese: ミカルゲ, Mikaruge), also known as the Forbidden Pokémon, is a Ghost/Dark Pokémon introduced in Generation IV. It is something of a villain in Pokémon.

Spiritomb appears in the 22nd request "Eerie Apparitions of the Night", offered by Vessa in Jubilife Village. She tells the player to collect 107 wisps scattered around the Hisui region to seal away the "being who brought calamities". Seven wisps are found in Jubilife Village and twenty are found in each of the five areas, more visible at night. After collecting all 107 wisps, Vessa instructs the player to meet her at the Shrouded Ruins in the Crimson Mirelands at night, where she reveals herself as the last spirit. With all 108 wisps, interacting with the Odd Keystone spawns Spiritomb, who battles the player. After completing the request, another Spiritomb may spawn after future visits.

In the special episode "In the Future of Darkness" exclusive to Explorers of Sky, Spiritomb is ordered by Dusknoir to hold Celebi hostage in the depths of Icicle Forest to lure Grovyle to an electric field. Spiritomb fakes timidness to draw Grovyle closer to Dusknoir's electric trap. When Primal Dialga attacks Dusknoir for saving Grovyle from the trap, Spiritomb cowardly runs off, releasing its grasp on Celebi. The ending cinematic shows that Spiritomb and the other future Pokémon have survived the future's presumed destruction when Temporal Tower was restored.

After destroying the village, Spiritomb then attacks Pikachu. Team Rocket appears and steals both of them, only for Spiritomb to destroy their balloon with Ominous Wind. Jessie sent out Seviper, but it is quickly defeated by Spiritomb's Hyper Beam. As they run, Spiritomb chased after them. Upon catching up with them, Meowth communicated with Spiritomb, revealing that it wants revenge on the Aura Guardian who sealed it within the Old Keystone.

Dawn plans to trap Team Rocket using Pikachu, and use them to lure Spiritomb. After Team Rocket fall into a pitfall, they then trick Spirtomb into believing Ash is the decedent of the Aura Guardian, making it chase after him and Pikachu. After a lengthy battle, Pikachu sends a Thunderbolt towards the sky, recharging his energy, before using a mixture of Volt Tackle and Thunderbolt to defeat Spiritomb, sealing it back into the Old Keystone. The group seal the Old Keystone back into the rebuilt Hollowed Stone Tower. 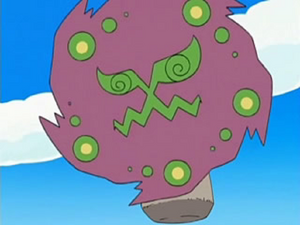