NOTE: This article is about Spitz from the 2020 adaptation The Call of the Wild. The mainstream version can be found here: Spitz.

Alpha of the sled team (formerly)

Kill Buck and remain in his position as the alpha of the sled team (failed).

Spitz is the secondary antagonist of the 2020 live action adaptation of Jack London's The Call of the Wild, distributed by 20th Century Studios.

He is a husky who serves as the egotistical and tyrannical leader of the sled team as well as Buck's arch-rival before Hal.

He was motion-captured by Terry Notary, who also played Cull Obsidian in the Marvel Cinematic Universe. His vocal sound effects were provided by Frank Welker.

When Perrault buys Buck, they climb the Golden Staircase, where Buck meets Spitz and the team. Buck sniffs Spitz and accidentally hits him with his tail as Perrault introduces him to the other members of the team. Perrault teaches the dogs on carrying the mail from Skagway to Dawson on a 500-mile long trip. Spitz stares at Buck as he falls down while struggling to get his harness off and Perrault tells him to follow Spitz. They head off and Buck struggles to follow along. Once Buck spots a rabbit, he tries to get the team to stop, but they fall off a steep slope. Spitz snarls at Buck and Perrault tells Buck to try to follow along.

The next day, the team continue their journey and deliver mail throughout the way. Spitz denies the entire team any food or water, but Buck shares them. As days passed, Buck gained confidence and became an experienced sled dog. One day, Francoise falls underneath a frozen lake, but Buck jumps in to save her. With the help of the Ghost Wolf of Dreams, he manages to rescue Francois, but Buck gets drifted away. Perrault tries to rescue Buck, but he manages to escape. Perrault hugs him and Spitz glares at him menacingly.

The following night, while Buck is sitting near a campfire with Perrault and Francoise, Spitz watches from a hill and leaves. Buck then notices a rabbit and chase it. The entire team follow Buck until he manages to catch the rabbit. Buck sets the rabbit free, but Spitz ambushes it and confronts the team. Spitz battles Buck and he gains the upper hand. He continues to attack Buck until he manages to slam him against a log, knocking him unconscious. Spitz rises to power and the team walks away in despair, but Sol-leks encourages Buck to get up. Buck regains consciousness and the Ghost Wolf appears as he encourages him to defeat Spitz. Buck gets up and Spitz rushes to him. Buck stands his ground and Spitz lunges at him, but Buck dodges his attack and manages to grab his neck and slams him to the ground. Buck pins him down and Spitz snarls in fear before he finally surrenders. He gets up and walks away in defeat out in the wilderness, never to be seen again. It's unknown what happened with Spitz afterwards, but it can be assumed that he went to live in disgrace at the wilderness for the rest of his life, putting his intelligence and hunting skills to good use.

The next day, Perrault tries to find Spitz, but he is nowhere to be found. With only Buck and the other dogs aware of Spitz's fate, Perrault and Francoise opt to give up on searching him to not get late and appoint Buck as the new Alpha to lead the other dogs into pulling the sled after all the dogs refuse the position, having acknowledged Buck's victory over Spitz and most likely fear of his fighting abilities and strength. 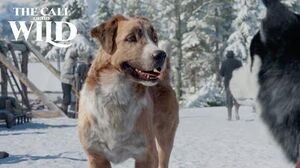 The Call of the Wild Buck Meets The Team 20th Century Studios
Buck meets Spitz and the Team. 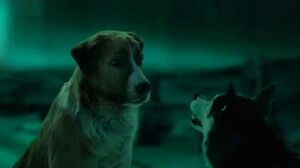 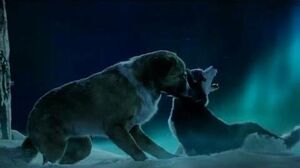