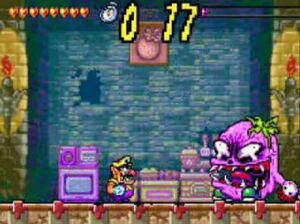 Spoiled Rotten is the first boss from Wario Land 4, fought after completing the first level. It resembles a giant, purple, anthropomorphic eggplant and has numerous childlike traits (such as carrying a doll).

At the beginning of the fight, Spoiled Rotten is assisted by two smaller eggplant creatures and simply walks around harmlessly, making it easy to hurt. However, after taking a certain amount of damage, Spoiled Rotten transforms into a terrifying and demonic monster with sharp fangs and grotesquely distorted features. When defeated, Spoiled Rotten explodes into a shower of smaller eggplants and can never be re-fought unless starting a new game.