Destroy SpongeBob and his friends.

Help Robot Plankton take over the world (both failed).

Despite looking male like the regular SpongeBob, he is classified as a female according to his fiancé Robot Plankton, and they were going to be wedded the week after their global takeover.

Much like his regular incarnation, he was voiced by Tom Kenny.

Depending on which version he is fought in, SpongeBot has a different appearance.

In the console versions, he is a massive metallic version of SpongeBob SquarePants in karate gear with jet flames coming out of his pants (allowing him to fly and damage SpongeBob through contact), transparent eyes, and a mouth in the shape of a speaker. In the GBA version, he is only twice the size of SpongeBob with red eyes and a metallic Krusty Krab hat. He also has a claw left hand and a spatula right hand.

SpongeBob, Patrick, Squidward, and Sandy find the massive SpongeBot within the Chum Bucket once 70 Golden Spatulas were collected. They discover that Plankton was behind the robots, showing the heroes that he accidentally forgot to switch the Duplicatron 3000 control to "Obey Plankton". Robo-Plankton reveals himself as the true leader of the robots and orders SpongeBot to destroy SpongeBob and his friends. The battle takes place in the Chum Bucket lab with the roof cut open and the floor partially destroyed.

SpongeBot has nine generators on his body that are his weak spots: two on his hands, four on each side of his head, two on the sides of his body, and one on the tip of his nose. While the two on his hands can be destroyed by the Bubble Bounce, the rest must be destroyed with the Cruise Bubble (or less accurately with a Bubble Bowl). SpongeBot shares three of his health points with Robo-Plankton, who shoots at SpongeBob each time three generators (two for the first time) on SpongeBot are hit and must be taken down either with a spin attack or a Cruise Bubble. SpongeBot's attacks by karate chopping at the platforms SpongeBob stands on, and always ends with a karate slap, where he rests himself for a while, allowing SpongeBob to hit him with a Cruise Bubble. As he loses more generators, SpongeBot's attacks get more aggressive as the fight continues. He will throw more chops at SpongeBob and performs the "Kah-Rah-Tae" ability, where the three syllables pop out of his mouth and hit the three platforms he stands before.

After all nine generators are destroyed, SpongeBot falls defeated (landing on SpongeBob in the process), but is revived thanks to Robo-Plankton and grows Anchor Arms. SpongeBob follows Robo-Plankton into SpongeBot through his ear. To progress through the inside of the robot, SpongeBob hits several fuses throughout the robot's body, while also destroying robot enemies and avoiding Robo-Plankton's laser beam. Once the three fuses in his "brain" are hit, SpongeBot knocks SpongeBob and Robo-Plankton out of his head before his anchor arms deflate and he collapses backwards.

SpongeBot is fought as soon as the main Duplicatron 3000 is destroyed. In this version, SpongeBot's only attack is throwing Krabby Patty bombs at SpongeBob, which can be eaten and spat out by Mystery back at the robot, meaning the fight cannot end without her. Only six bombs are required to take SpongeBot down. Since the arena fought on a conveyor belt, SpongeBob and Mystery must keep moving to the left of the screen while jumping over the bombs to avoid falling to their deaths. 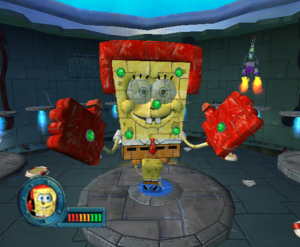 SpongeBob SteelPants in the console version. 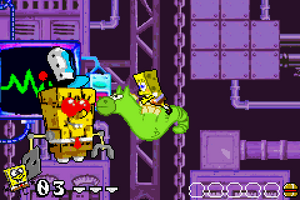 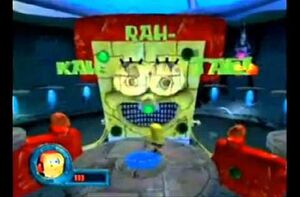 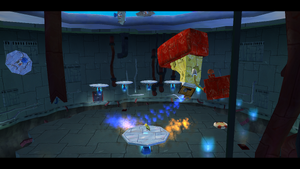 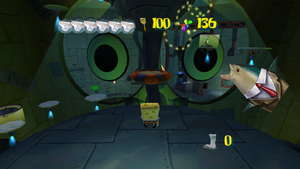 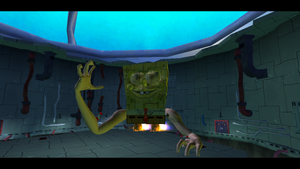 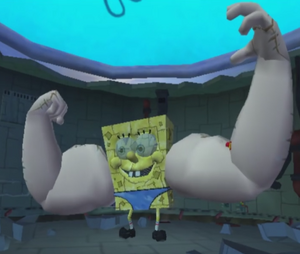 The beta version of SpongeBot SteelPants that was never in the game with anchors arms. 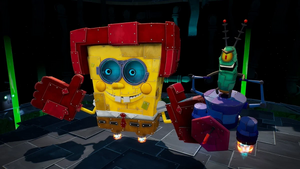 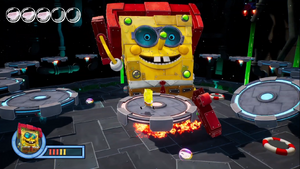 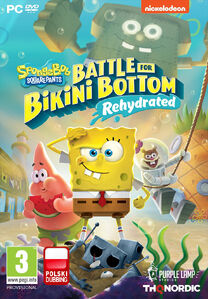 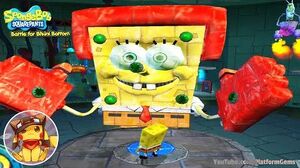 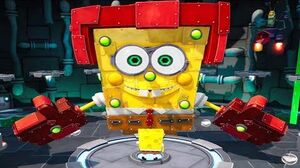 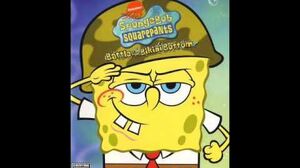