Spooge is a minor antagonist in Breaking Bad, appearing as one of the two main antagonists of Jesse's storyline in the episode "Peekaboo". He is a dangerous meth addict who robbed Skinny Pete at knife-point with the assistance of his unnamed wife.

He was played by David Ury.

It has been hinted that Spooge was either an EMT or a registered nurse due to instances of using sophisticated medical terminology. Him and his wife had ended up having son, but they would much rather spending time doing meth than taking care of their child.

Spooge and his wife manage to rob Skinny Pete for an ounce of meth at knife-point. Jesse ends up going to their house with a gun to either retrieve the stolen meth or to get payment for it after Skinny Pete finds their address. Spooge makes the attempt to repay Jesse for the meth by trying to break an ATM he stole after murdering a store clerk, but Spooge's wife knocked him out while Jesse was distracted.

He starts to insult and verbally abuse his wife, which drives her to push the ATM onto his head, crushing his skull and killing him. After Spooge's death, his wife is arrested and his son is taken away to child protective services, hopefully to either be taken care of by other family members or a new family entirely. 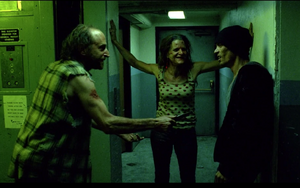 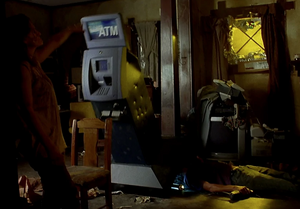 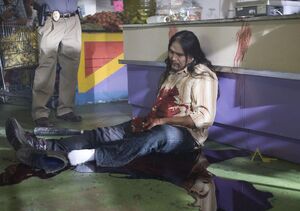 The convenience store clerk that was murdered by Spooge.