Owner of the Jumpscare Mansion

Creating new guards for her mansion

Kill the Player (succeeded).
Lead an army of ghosts to stop people from calling ghosts cute.

She is the restless soul of a 12-year-old cute-looking girl who appears to have a huge sum of power and impact over the events that have and will happen in the manor, and the creator of the massive group of Specimens from the game.

She was voiced by the game's creator Akuma Kira.

In the Secret Arcade Room in the manor, and a note from the Karamari Hospital DLC revealed the brief but understandable backstory of Spooky. Spooky started her life as a cute human girl who is insecure due to her cute appearance led her made fun of, especially during Halloween. She tried to where her most frightening Halloween costume, but alas, she was still cute.

On one Halloween night, when she tried to scare someone with her Red Death costume from the tale The Masque of the Red Death from Edgar Allan Poe and some fireworks, her victim, who later revealed to have suffered PTSD, unexpectedly shot her to death with a gun. It's unknown what happened to the killer next, but the mortally wounded Spooky was presumably brought to the hospital, where she died there. Her father blamed himself for not preventing it from happening, as he could not bring himself to hate her killer due to the said killer were suffered PTSD due to scarred and traumatized by an accident with fireworks in the past.

Due to her violent death and being a misunderstood girl who was ridiculed due to her cute appearance, Spooky returned as a ghost to take her revenge so she and other ghosts who were ridiculed due to adorable looks can rise and terrorize the living so they won't be ridiculed anymore. For that, she somehow gathered many people includes scientists and workers to build a maze of 1,000 rooms below a derelict mansion upon the hill that casts a blanket of darkness over a town, and fills the maze with various monsters that identified as Specimens. Afterward, people who aided Spooky either left or were killed by monsters inside.

She then challenged an unspecified number of people to enter the labyrinth and survive various jumpscares and encounter with the monsters until they arrived at the 1000th room, but no one returned due to either being killed by the Specimens, or due to starvation and dehydration up until the protagonist arrived.

In the game, Spooky appears every two hundred rooms, to congratulate the player on the way, getting more miffed that they are not dying yet, tricking the player at Floor 250 (playing a harmless prank) and Floor 750 (saying she's giving the player infinite stamina, but instead disables sprinting).

In the final room (being Room 1,000), the player finds themselves in a peaceful field, leading the player to think they have survived the horrors of the mansion. However, the "sky" soon crashes as Spooky appears before the player, looking rather irritated that the protagonist managed to live. However, as Spooky is talking, Specimen 9 bellows out an angry roar, which cheers up the ghost, stating that the player needs to do one more thing before they can leave, being to beat a transformed Specimen 9.

The final boss can result in two different endings. If the player uses the axe too much in the game (even if when using it for Specimen 9's Boss form, for example), they will get the bad ending. The playable character repeatedly chops away at the beast, the screen getting more of a red tint with each swing. After this, Spooky then appears, both in congratulation and to say it was interesting to see them swing their weapon with reckless abandon. She then says she thinks they'll make a great example of a Specimen. After this, the protagonist is then shown dragging their axe behind them, as the screen reads "Bad Ending".

However, if the protagonist uses their weapon sparingly against Specimens and the boss, they are able to get the Good Ending. If they are to get said Good Ending, the roof collapses on both the hero and the beast. After this sudden event, Spooky suddenly appears once more, claiming that the protagonist died and became a ghost, due to their tragic death. After revealing this, both of them float above the floor, which reveals a ledge over a large number of ghosts in a large room. Spooky appears on a large screen in the center of the room, stating that her collection of specters now has the proper amount to execute her true plan, to lead an army on a quest to stop the fact people think ghosts are cute. After this, the game ends.

There is also a secret ending of the game. When the player reaches the 999th floor and presses Ctrl + Alt + Tab, Spooky somehow turns into a Shiba Inu, licking the player's face.

In the Karamari Hospital DLC, Spooky appears after the elevator crashes, mentioning that she didn't remember the fact the mansion had the rooms, and leaves, allowing the player to explore the hospital. Later, she appears again to remark on the size of the hospital, interested, she leaves, after wishing her "recruit" luck. She appears yet again when the player leaves the hospital, noting the player forgot to find something inside the hospital after this leaving and saying goodbye to the player. After beating the mode once, the player unlocks the ability to play the New Game + version of Karamari Hospital, where the ghost wears a unique outfit similar to a nurse's garb.

In the Spooky's Dollhouse DLC, it is revealed that after Spooky was killed, her father used science and voodoo to bring her back to life as a ghost. However, in the process, a hellgate built to retrieve her soul malfunctioned and released demonic forces. A one-thousand room mansion was built to prevent the evil spirits from escaping. In the DLC, after sacrificing the doll to deactivate the seal in the seal chamber, the player appears in a maze of red corridors, full of enemies they can defeat with a rifle. At the end of the maze is a human Spooky in her Halloween costume. The gun goes off, shooting Spooky in the chest and killing her.

When still alive, Spooky was an insecure and misunderstood girl who was ridiculed for her cute appearance, which stemmed her determination to be able to scare anyone. Sadly, it was what led to her untimely and violent demise, as when tried to pulling pranks from someone with fireworks and her Red Death Costume, the man panicked so bad out of fear that he shot her to death. The violent death resulting in her return as a vengeful, sadistic, and manipulative ghost that Spooky unfortunately became. Her sadistic and indifferent to other people's wellbeing, which is made apparent as one of the Generic Lab assistants stated that Spooky gave cold shoulder when one of the monsters escaped.

When still a human, Spooky had the cartoonish appearance (e.g. oval-shaped eyes, chibi-esque form, and many more) and long blue hair. These traits even remained after becoming a ghost, though her skin becomes light blue. Her casual outfit back when still human consists of a knee-length white dress, with little white shoes and red socks. These attires later replaced by a tattered light blue dress upon becoming a ghost. 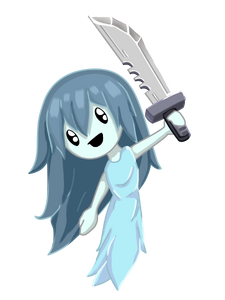 Spooky back when she was still human, troubled by her cute appearance. 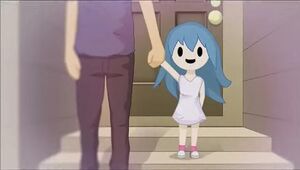 Photo depicting human Spooky with a man, presumably her father.

Spooky shown during the December update of the game, having murdered Santa.

Spooky on the Thanks poster, where she wields a minigun. 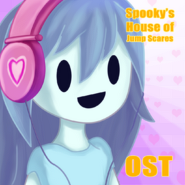 Spooky on the cover of the game's OST.

Spooky on the title of "Spooky Kart".

Spooky in a promotion image for "Karamari Hospital". 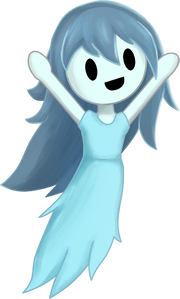 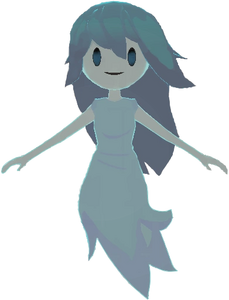 Retrieved from "https://villains.fandom.com/wiki/Spooky_(Spooky%27s_Jump_Scare_Mansion)?oldid=4134895"
Community content is available under CC-BY-SA unless otherwise noted.