Gather energy to give to Majin Buu (succeeded).

Spopovich is an antagonist in Dragon Ball Z specifically being one of the two main antagonists of the World Tournament Saga (the other being Yamu) and a minor antagonist in the Babidi Saga. He is a muscular competitor in several World Martial Arts Tournaments, and a long-time rival of Mr. Satan. He is one of the two humans ensnared by the wizard Babidi's mind control. As with his partner, he retains some free will except for being much more sadistic.

He was voiced by Hisao Egawa in Japanese and Michael Dobson in Ocean dub and Andrew Chandler in Funimation dub in English.

Spopovich was a human fighter who lost to Hercule in the first round of the tournament. When Babidi put him under his spell, he became much more powerful to the point he was near the Z Fighters' level, though not as strong as the Saiyan members. He returns to compete in the next Martial Arts tournament.

In a fateful turn of events, Spopovich is matched up against Mr. Satan's daughter, Videl, in the first round of the official World Martial Arts Tournament. In spite of the match-up, Mr. Satan believes his daughter would win with ease.

While Videl fought quite well at the start of the match (even managed to "break" Spopovich's neck, which mattered not, due to his regeneration ability), Spopovich remains virtually immune to every single one of her attacks, proving himself to be superior in power to her. Thrilled at the golden opportunity of wreaking vengeance on Satan for his humiliating defeat, Spopovich viciously attacks Videl with all of his pent-up aggression. He takes out his loss toward her father out on her by beating her senseless, at some points even mimicking Gohan's battles with Nappa, Recoome, and Cell—He berates her constantly, gives her a large bearhug, sits on her, and farts loudly to embarrass her. When she nearly falls out of the ring, rather than simply winning, Spopovich catches her just in time, and places her back in the ring as to continue his torture. Eventually, he begins to step on her head, causing her so much pain that she is even more embarrassed as she starts to cry and cough up blood. Despite this, she still refuses to give up as Gohan becomes mad and powers up to Super Saiyan and also loses his Great Saiyaman disguise to stop the match after Goku orders Gohan to not go out there. When Yamu tells Spopovich to stop, he kicks Videl out of the ring and wins.

In the fourth battle, when Gohan turned Super Saiyan 2, Spopovich held Gohan in place while his partner Yamu drained his energy for Majin Buu. They then returned to Babidi's spaceship. After taking the energy, Babidi decided he had no more need of Spopovich and Yamu, and killed Spopovich by using his magic to make him expand until he exploded. This signified the true evil of Babidi.

The original Spopovich, prior to his hypnotic ensnarement, was mentioned in the manga and seen in brief anime flashbacks. He was depicted as one of the combatants in the 24th World Martial Arts Tournament. Despite his seemingly unbeatable appearance and muscular physique, he was not very strong in regards to actual power, and quickly lost to Mr. Satan who outclassed him in every way, including skill.

During the World Tournament Saga, Spopovich competes in the following 25th World Martial Arts Tournament; however, his appearance is drastically altered from his previous form. He is devoid of his original brown mane, his skin is colored a pale grey-hue and his muscle-mass has greatly increased since the last tournament. Yet another distinguishing feature from his past appearance is the dark "M" symbol now plastered on his forehead. Spopovich is accompanied by his ally Yamu, who exhibits similar characteristics in comparison to his own ghoulish appearance. The fact that he embraced Babidi's magic indicates that Spovivich is not a good man.

Spopovich is also much more openly sadistic than his partner. Unlike Yamu who despite being ruthless in his own right, doesn't revel too much in other people's suffering, Spopovich tortured Videl all because he was still furious over Mr. Satan beating him during the previous tournament. His torture of her was so bad that Yamu told him to stop; partly because he was wasting time, and partly because even he felt sick while witnessing Spopovich's treatment of his rival's daughter. This is the first sign that despite being controlled, those under Babidi's influence do retain enough of their humanity to understand what they are doing is wrong. 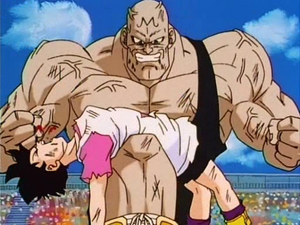 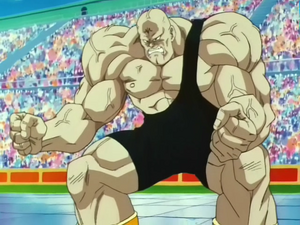 Spopovich in the 25th World Tournament. 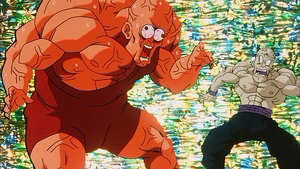 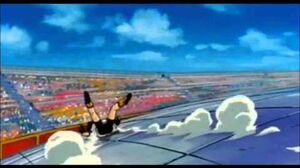