Having sex with prostitutes
Sculpting
Taxidermy

Sports Maxx is a significant minor antagonist in JoJo's Bizarre Adventure: Stone Ocean. A prisoner in Green Dolphin Street Prison and one of Enrico Pucci's minions, he is the one behind the murder of the sister of Ermes Costello, Gloria Costello, and is her archenemy. He wields the Stand known as Limp Bizkit.

In JoJo's Bizarre Adventure: Eyes of Heaven, he was voiced by Kōsuke Toriumi.

Prior to his imprisonment, Sports Maxx was a aggressive member of his local mafia, while also working as a car dealer nearby a poorer side of his city to create a front. Although originally able to keep a low enough profile to behind forty counts of unknown crimes, Gloria eventually caught him torturing and murdering a man outside her restaurant. Seeing a fleeing Ermes, Gloria put her life on the line by calling the police to protect Ermes, an action that would prove to result in Gloria's demise through either an assassin Sports Maxx hired or one of his men, if he had any of the latter. Her body found in the gutter some days later, Ermes would eventually succeed in having the man arrested, but due to the fact no eyewitnesses of the murder could be given, Sports Maxx could only be given five years in prison for tax-evasion and assault. This action caused Ermes to swear revenge on the man, committing crimes to eventually end up in the same prison Sports Maxx was held, being Green Dolphin Street Prison.

In prison, Sports Maxx would eventually get into contact with the prison's priest, Enrico Pucci, and became one of his minion's, eventually gaining a Stand from Whitesnake. Sports Maxx also attempted to give DIO's bone life, only for it to drill through his hand and move to the maximum security ward.

Sports Maxx makes his first appearance beyond Foo Fighters telling Jolyne Cujoh his background investigating a trap laid by Ermes in hopes to kill him, using a picture of Gloria and Kiss' ability to multiply objects to trap Sports Maxx in a pipe. However, Limp Bizkit manages to activate on the taxidermized corpses of a hummingbird and an alligator and causing their zombies to attack the heroes, with the latter both injuring Foo Fighters' badly and breaking the pipe-based prison Sports Maxx was held in.

Emerging unknowingly a zombie, parched, and with him forgetting what truly happened to him or his mission, Sports Maxx decides to cool down by trying to coax a prostitute into sex, not realizing he is invisible towards her. Finding drugs from a unconscious prisoner, he takes them only to find out on his undead status and his hunger for flesh. Killing the prostitute, Sports Maxx turns his attention towards Jolyne and Ermes, with him both attacking them himself and using Limp Bizkit to summon zombies to attack them in his stead. Sports Maxx eventually succeeds in taking down Jolyne and turns attention to his archenemy, Ermes. Using a copy of her head to block a chomp from behind from Sports Maxx's disembodied head, the zombies Limp Bizkit summoned continue to try and devour Ermes, only for Sports Maxx to be stopped by Kiss' stickers revealing his position form removing the flesh Sports Maxx devoured from the decoy head, before attacking him. Additionally, when Sports Maxx attempts to flee, Ermes once again uses her stickers to not only find out where the gangster is to pummel him, but this second rush of blows from Ermes causes Sports Maxx's Memory and Stand Discs to be launched from his body, with the lack of Limp Bizkit causing him and his zombies to fall apart and rest in peace once and for all.

Sports Maxx would later appear as a vision Donatello Versus' Under World creates to lure Ermes towards him and to explain his abilities.

Of a fairly average height and build, Sports Maxx has blond hair going off into spikes, large eyebrows ending in tails, blue eyes, and purple lipstick. For clothing, he wears a purple coat covered in black paisleys with "GD st. Jail" written on the back in orange text over a blue shirt, matching pants and shoes, and a grey skull-brazen ring. As a zombie, he retains the same design, but with paler skin.

Although seemingly a respectable man with nothing too eerie beyond his love of taxidermy, Sports Maxx is truly a violent criminal not only addicted to sex and drugs, but also having a liking towards torturing and murdering his foes. After becoming a zombie, Sports Maxx also gains their standard desire to devour flesh and drink blood.

Despite the fact Limp Bizkit lacks a physical form, the Stand itself is still truly deadly. On command, Limp Bizkit has the ability to reanimate the dead as invisible zombies with a craving for blood and brains, stronger physical strength, and the ability to climb on walls, with this effect being able to reach any corpse, no matter how old, what species it is, or if is in a singular piece. Additionally, the Stand User not only has control over Limp Bizkit after their own demise, but they also are able to be revived as one of it's zombies. Despite these upsides, these zombies are not invincible, as they can be silenced permanently if killed a second time, with their corpses sharing the zombie's wounds if this happens. Additionally, if the revived user is killed, all zombies cease to be as well.

Sports Maxx's first appearance as he is torturing, and shortly after, killing a man. 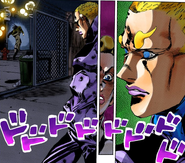 Sports Maxx noticing a running Ermes, mistakenly assuming her to be running from the scene of the crime.

A zombified Sports Maxx's escape from his prison. 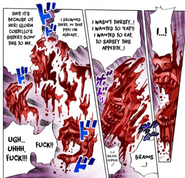 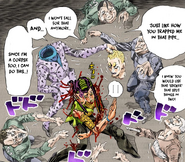 Sports Max revealing his ability to remove his head as zombies surround Ermes. 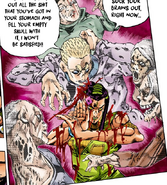 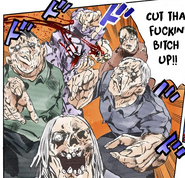 The vision of Sports Maxx revealing Under World's abilities. 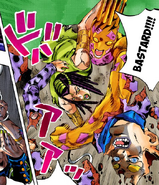 The vision of Sports Maxx's demise.