Get revenge on the people that fired him.

Get money (both failed)

Vengeful Thief
Lawrence "Crusher" Crock, better known as Sportsmaster, is a minor antagonist in DC Comics, being an enemy of the Justice Society of America, Green Lantern, and the Flash.

Lawrence "Crusher" Crock was one of the world's greatest natural athletes and excelled in virtually every sport, a number of which he played professionally. Crock was so obsessed with winning that he would do almost anything to win, no matter how unsportsmanlike or even brutal it was. Finally, after he permanently crippled another player during a professional football game, Crock was fired from the team and barred from professional sports as a whole. Crock then decided to use his prowess in sports for crime. While disguised as the leader of a "mystery" team, he tried to rob the spectators at a polo match. However, he and his accomplices fled after clashing with the original Green Lantern. Later, Crock seemingly fell to his death while trying to kill Green Lantern. Crock somehow remained alive and returned as the Sportsmaster, as a costumed criminal who used his athletic ability and ingeniously gimmicked sports equipment to commit robberies.

Sportsmaster made a cameo appearance in the episode "The Cat and the Canary" as part of Roulette's Meta Brawl. He later makes a few appearances as part of the Legion of Doom.

Sportsmaster appears in the episode "Invasion of the Secret Santas" where he and his gang attack a Christmas eve bowling event where they steal trophies and use hostages as pins and was about to blow them up with an explosive ball however he is defeated Batman and Blue Beetle. He later appears in the episode "Hail the Tornado Tyrant" where he and his gang rob a bank but are thwarted by Red Tornado and his son. In the episode "Aquaman's Outrageous Adventure", he is shown on the road with his wife Tigress and his daughter Artemis, apparently on vacation.

Sportsmaster is an antagonist in the TV show Young Justice, being seen here as Artemis and Cheshire's father. He was one of the operatives with The Light, as well as one of the Ra's al Ghul's assassins in the League of Assassins.

In Stargirl, Sportsmaster appears under the name of Larry Crock, where he is portrayed by Neil Hopkins. Here, is a member and enforcer of the Injustice Society of America (ISA), and ten years prior to the series, he assisted in destroying the old JSA headquarters and killing most of its members. In the present day, he lives in Blue Valley with his wife/partner, Paula Brooks (Tigress) and daughter, Artemis Crock, and owns a public gym. 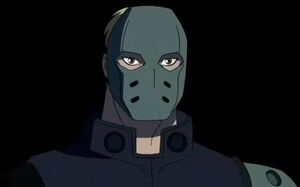 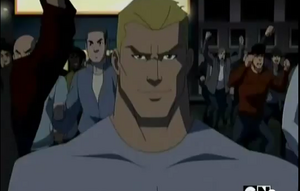 Sportsmaster without his mask in Young Justice. 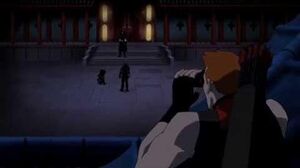